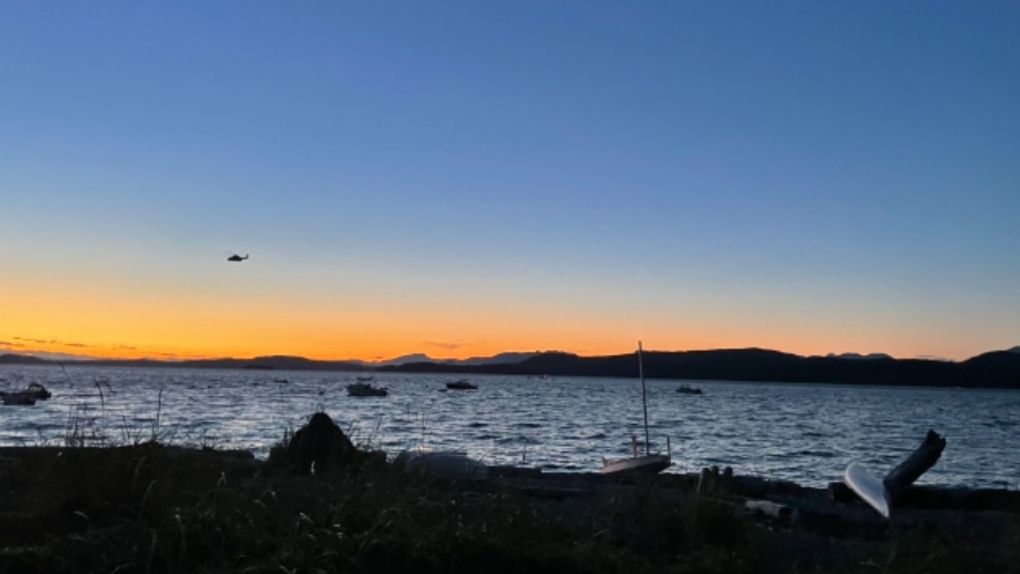 A photo of the rescue taken from shore shows a Cormorant helicopter from 19 Wing Comox responding to the scene.

Four people were rescued near Savary Island off the east coast of Vancouver Island on Thursday evening after the vessel they were travelling in capsized.

According to Second Lieutenant Vatsal Shah of the Joint Rescue Coordination Centre, the incident took place around 9 p.m. about 800 meters off of a beach on Savary.

The group was travelling on a 3.6-metre pleasure craft when it capsized.

"There were four people in the water and one of the persons from the boat using their cell phone made the call," said Shah.

The JRCC spokesperson initially said one of the overboard passengers attempted to swim to shore and was picked up by a boat in the area, while the other three were pulled from the water by the coast guard vessel Cape Caution.

CTV News Vancouver Island has since been contacted by the operator of the civilian boat, who says he  was the first to pick up all four passengers, and later transferred them to the coast guard.

In a phone interview with CTV News on Saturday, the boater - who didn't want to be identified by name - said he was returning to Savary Island from fishing when he heard someone screaming for help.

It was the man who had attempted to swim to shore. When the civilian boater picked him up, he said there were three other people in the water.

So, the pair set out to find them, but the task proved difficult in the setting sun and rough seas. They called 911, then saw a light on the water. It was coming from the cellphone of one of the distressed boaters.

They were able to follow the light to the distressed boaters and pull them aboard. Coast guard crews arrived soon after.

Vessel tracking at the time of the incident shows that a BC Ferries vessel travelling between Powell River and Comox, as well one from Powell River to Texada Island, began making their way to the incident before they returned to their regular routes.

A Cormorant helicopter from 19 Wing Comox was also dispatched to the scene.

Shah says the four were taken to Powell River and then transferred to hospital by ambulance. All four are in good condition.

What caused the vessel to capsize is still unclear.

"We’re not sure. It’s most likely that it was overloaded, because there were four people on there, and it was just a 12-foot-pleasure craft," Shah said.

As Atlantic Canadians grapple with the aftermath of destruction caused by Hurricane Fiona, CTVNews.ca takes a look at major hurricanes that have wreaked havoc in the country throughout history.

A man suspected to be involved in a triple homicide in Brossard is expected to appear in court to face charges of murder and arson.