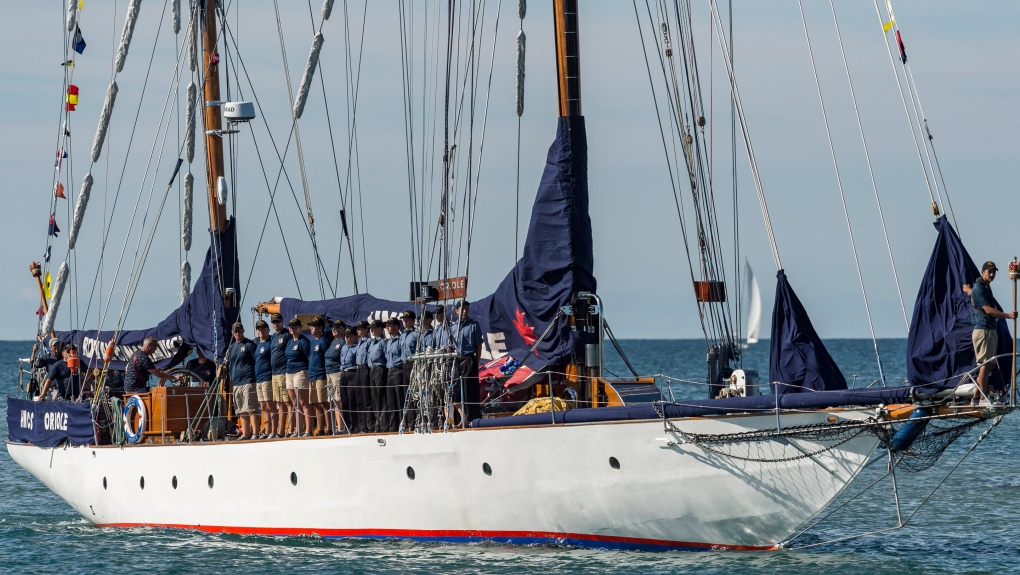 Cadets and crewmembers aboard the training vessel HMCS Oriole near Whitby, Ont. as part of the vessel’s 2018 Great Lakes deployment on Aug. 10, 2018. (Royal Canadian Navy)

A retired Canadian navy officer has been found guilty of assault, sexual assault and uttering threats against a young female cadet aboard a navy sailboat more than a decade and a half ago.

The charges against former petty officer first class James R. Levesque stemmed from a 2006 sailing of HMCS Oriole, a historic training vessel that serves double-duty as a showpiece of the navy on its summer voyages along Canada's coastlines.

The victim, who cannot be identified under a court-imposed publication ban, testified at a court martial hearing in Victoria that Levesque, a senior non-commissioned officer, repeatedly groped her and physically assaulted her, once leaving bruises on her arms, during the ship's journey that summer from southern Vancouver Island to Alaska.

He later threatened to have sex with her and leave further bruising on her body, despite her protests, the court heard.

The incidents left the cadet with a lingering fear of sailing and an inability to sleep aboard vessels, a significant hindrance to her future career in the navy, she said.

Levesque denied the allegations, pleading not guilty to all three charges.

There were no eyewitnesses to the assaults or threats, the court heard, while the defence provided testimony from fellow sailors who said the incidents were never relayed up the ship's chain of command.

The prosecution did provide testimony from another woman who was among the vessel's 24-person crew that summer. She testified that the victim confided in her about the assaults and threats, saying the two of them would later coordinate their excursions ashore during port visits so the victim would not be alone, fearing for her safety.

The witness also testified that some of the male sailors refused to accompany the victim ashore because they would "get dirty looks" from passersby due to the significant bruising on her arms.

The victim testified that the assaults made her feel "scared and really worthless," and said that a senior officer discouraged her from reporting the incidents to police.

The court was shown more than 100 photos taken aboard the ship between June 1 and July 31, 2006. The photos depicted a party atmosphere on the 31-metre ship that summer, with shirtless male sailors drinking tequila and, in another photo, exposing their bare buttocks during a beach visit.

But the prosecution described a "terrorizing" two months for the victim aboard the Oriole, the oldest vessel in the Royal Canadian Navy, now based out of Halifax.

"I was so excited when I first got to the ship," the victim told the court, adding that she "wasn't the same again" when the ship arrived back in Esquimalt.

The guilty verdict landed on the eve of a highly anticipated report into sex offences in the Canadian Armed Forces, in which a retired Supreme Court justice urged the military to hand over the prosecution of sex crimes in its ranks to the civilian court system.

Levesque will be sentenced during a hearing scheduled to begin on July 9.