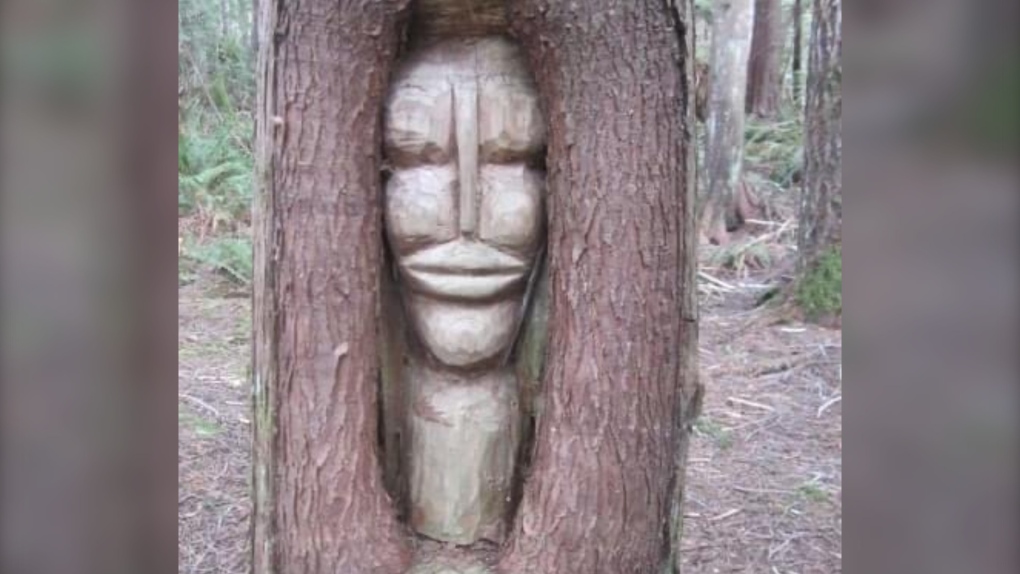 A North Island man is livid after discovering that a Culturally Modified Tree (CMT), which has been viewed by thousands of people from around the world, has been chopped down and stolen from where it stood. (Michael Henwood)

COURTENAY, B.C. -- A North Island man is livid after discovering that a Culturally Modified Tree (CMT), which has been viewed by thousands of people from around the world, has been chopped down and stolen from where it stood.

Michael Henwood says the tree, which had a face carved in it around eye-level, was removed from the Anutz Lake Campground, where it was enjoyed for decades. The tree was a Spirit of the Nimp'ka known as "Spirit of Anutz."

"This is something that has been in this camp where thousands of people from all over the world have come to view this thing," Henwood says.

Henwood operates the Cave/Karst Expeditions Base Camp and has used the Anutz Lake area as a base of operation since the early 1980s. He was stunned to learn that the massive tree containing the face, also called an arborglyph, was stolen.

Comparing it to chopping down a totem pole, Henwood says many North Islanders are equally upset with what occurred.

"That's literally disrespecting all aspects of cultural history," he says.

Henwood, who also works in the North Island's logging industry, theorizes that the person who stole the spirit tree used a chainsaw and didn't appear to know what they were doing based on the evidence left behind and because the tree was felled into a second tree on an upright angle.

"This person almost killed themselves cutting the tree down to begin with; he must have scared the living hell out of himself," Henwood says.

He estimates the task would have taken between an hour and an hour and a half and believes the campsite would have been full at the time, so believes someone out there knows who did the cutting.

Henwood says many in the logging industry are upset with whomever took the tree and "would like to hang him right now," but Henwood believes fines are definitely in order.

Henwood's initial posting about the theft on Facebook has already been widely shared, with some speculating the tree may have been stolen by a visiting tourist.

"Is this what we get for opening up our back door and our back yards to people?" Henwood asks.