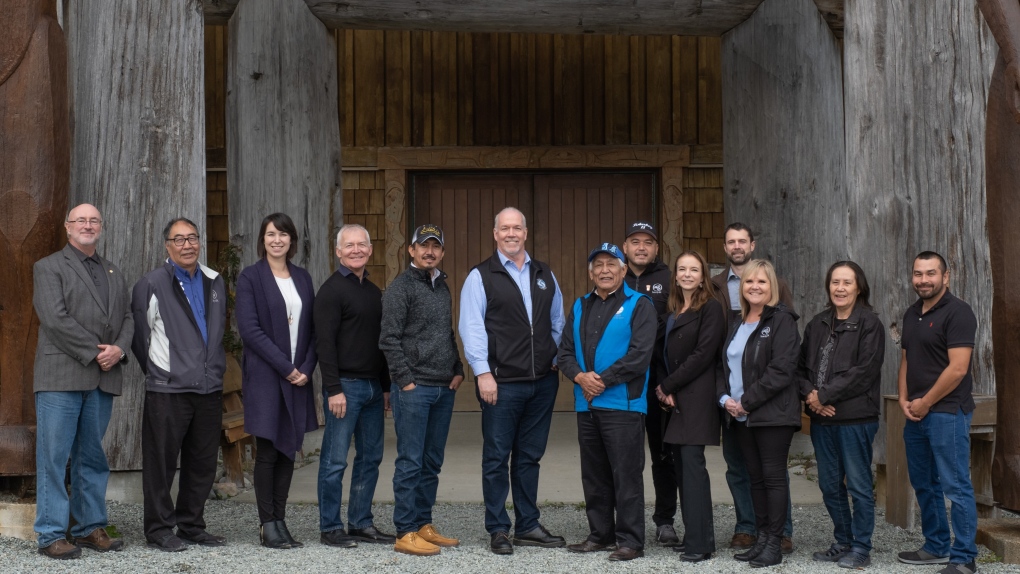 John Horgan and several other officials visited the Huu-ay-aht First Nation in Anacla, B.C., travelling down Bamfield Main Road - on which two University of Victoria students died in a bus crash in September - to get there. (Munro Thompson Communications)

VANCOUVER - A Vancouver Island First Nation says it is optimistic about the prospect of upgrades to the main road through its territory after receiving a visit from the Premier.

John Horgan and several other officials visited the Huu-ay-aht First Nation in Anacla, B.C., travelling down Bamfield Main Road - on which two University of Victoria students died in a bus crash in September - to get there.

"Huu-ay-aht First Nation is pleased that the Premier took the time to travel to the nation's main village and is optimistic it will lead to significant upgrades to the road," the nation said in a news release Thursday.

"The Premier directed the representatives from the Ministry of Transportation and Infrastructure present at the meeting to form an action group with Huu-ay-aht and other key stakeholders to create a plan to upgrade the road," the nation said.

The September crash claimed the lives of UVic students from Manitoba and Iowa. Several others were injured in the crash. There were a total of 45 students and two teaching assistants on the bus when it went over an embankment on Bamfield Main Road late in the evening on Sept. 13.

The bus was taking students to Bamfield Marine Science Centre. Though the road is privately owned and primarily used by logging trucks, it is also a major route to the centre and to the Huu-ay-aht nation.

In the wake of the crash, officials from the area - including Huu-ay-aht Chief Councillor Robert Dennis and Port Alberni Mayor Sharie Minions - said traffic on the road has been increasing in recent years.

On Thursday, Dennis said his nation's goal is to "chip seal" the road. He praised the visiting officials for taking the time to visit the community and discuss the issue.

"Together we have the tools we need to make significant upgrades to the road," he said in his nation's release. "We have met in a respectful way, and it is clear we are all committed to take the necessary steps."

Since the road opened in the 1970s, the Huu-ay-aht nation has lost eight members and seen "countless accidents" on the road, the nation said.

In honour of the Horgan's visit to their territory, the Huu-ay-aht presented him with a traditional name: Yatsuk ma tashii, which means "he who walks the path."