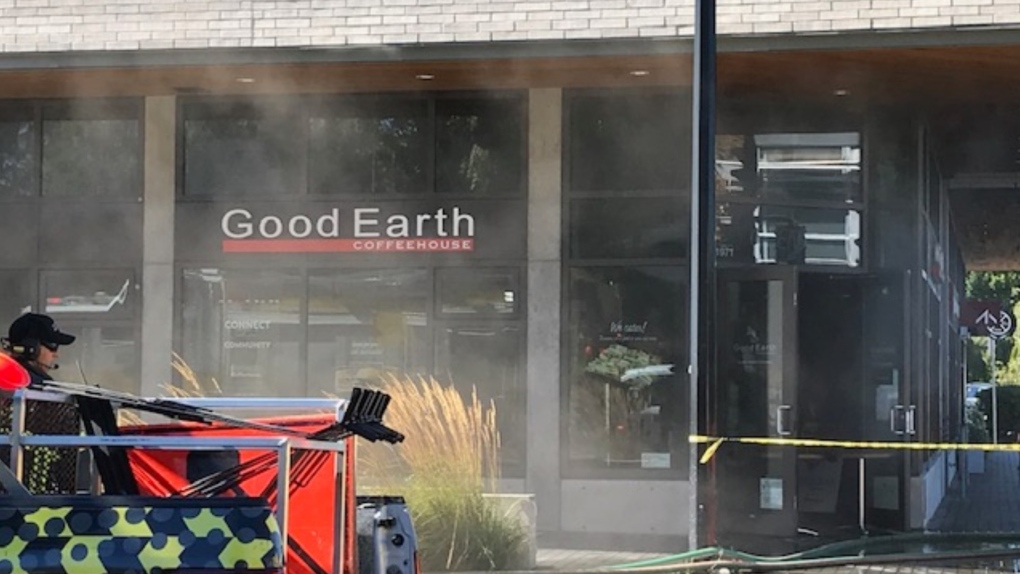 Witnesses say firefighters are at the scene of a fire located at the Good Earth Coffeehouse in Oak Bay. (CTV News)

VICTORIA -- Firefighters and police officers responded to a fire at a coffee shop along Oak Bay Avenue on Tuesday afternoon.

Firefighters were focusing their efforts on the Good Earth Coffeehouse, located on the ground floor of a building at 1971 Oak Bay Ave.

Smoke could be seen pouring out of the building while firefighters were inside of the coffee shop trying to pinpoint the source of the smoke.

The cause appears to have been an electrical problem in the ceiling at the back of the shop.

An employee at the nearby Hush Lash Studio said a road paving crew working out front of the shop ran in to tell her there was smoke coming from the building.

Smoke and fire alarms had apparently not sounded inside the building yet, she said, describing how she and other staff members tried to use an intercom to alert residents in the condo building above the studio.

The building was evacuated and Oak Bay and Victoria police blocked off the intersection of Oak Bay Avenue and Foul Bay Road.

Approximately 10 fire trucks were in the area to respond. The Victoria Fire Department sent five fire engines and multiple crews, while the Oak Bay Fire Department was on standby.

While the fire occurred along Oak Bay Avenue, the building’s exact location falls under the Victoria Fire Department’s jurisdiction.

The Oak Bay Fire Department’s jurisdiction begins just on the other side of the intersection.

Community members in the area tell CTV News that the coffee shop was closed at the time.

Officers are responding to assist firefighters at a fire reported at a coffee shop in the 1000-block of Foul Bay Road. We'll be working with @OakBayPolice to control traffic & help keep everyone in the area safe. #yyjtraffic will be impacted. Please use a different route. #yyj