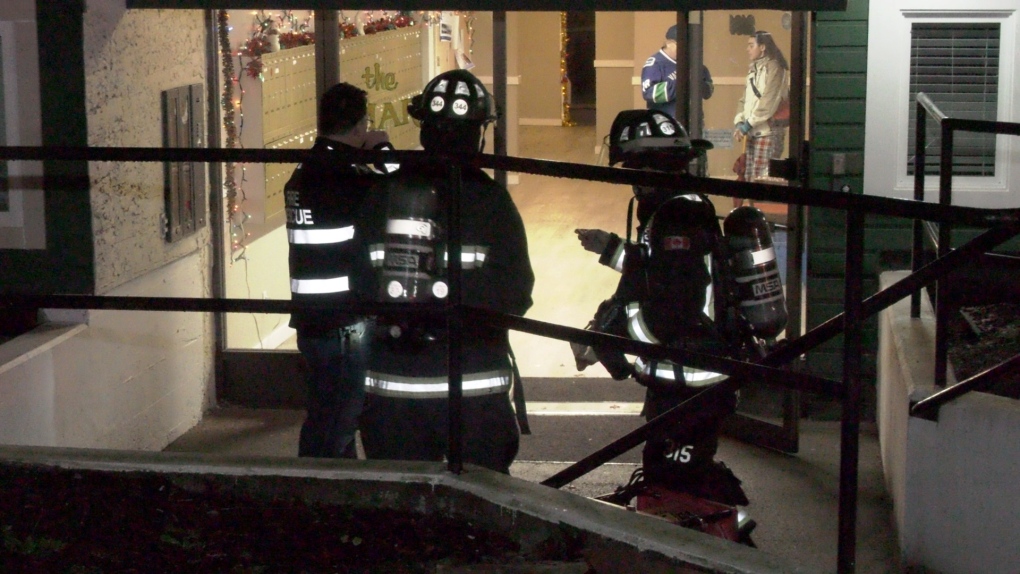 A pull station fire alarm was activated shortly after 6 a.m. in the Mariner Apartment Building on Comox Avenue when the smoke was spotted.

"I looked in the hallway and I could see smoke and thought, 'Oh my God, Katie, there's smoke in the hallway, we have to get out of here,'" said tenant Danielle Dumont who evacuated with her daughter.

Dumont said the smoke was quite thick and could be seen travelling from the other end of the hallway towards her second unit apartment.

"I brought them out and went back up and could smell smoke really heavy on the second floor and we came out and the fire department showed up and took care of it," said Murray.

Captain Rob Stevens of Comox Fire Rescue said the incident began when some hot debris was put into a garbage can under a kitchen sink on the second floor.

Stevens said about 22 firefighters responded and were quickly able to pinpoint the origin of the smoke. He said residents were very cooperative in evacuating the building.

"That's pretty unusual in most places, especially at this time of day," said Stevens. "People are reluctant to move out of their apartments, it is cold and uncomfortable."

Friday's incident brought back memories for tenants of the 74-unit complex, many of whom were forced out of the building at the beginning of 2019 when a water main backed up, flooding many units on the first floor. After the flood, some tenants didn't get back into the building until May.

"Started with a flood in January and ending the year with a fire, so we've had a pretty rough go in this building," Murray said.

Dumont didn't have insurance for that first incident and had to live with her sister for a few months. But, after the flood, she purchased coverage and had it for this event.

"Thank God I got insurance," said Dumont. "I was stuck, I didn't have any insurance so I had to hurry up and find a place to live and it was a really stressful time so I won't do that ever again."

The tenants were allowed back into the building Friday after being outside for just over an hour while firefighters cleared out the smoke.