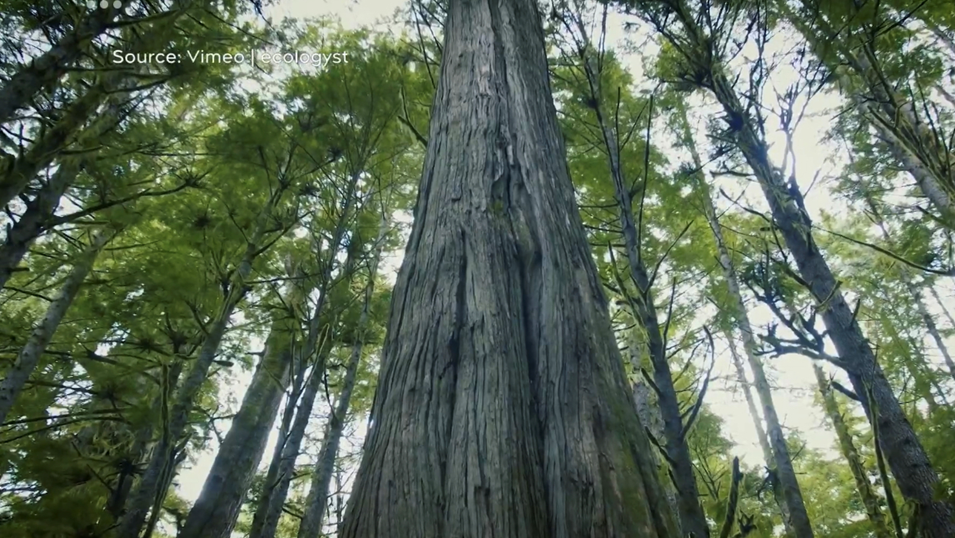 A stand of old growth forest on Vancouver Island as seen in “Before They Fall.” (Source: Ecologyst Films)
Victoria -

The documentary Before They Fall explores the relationships that Indigenous people, conservationists and climate scientists have with the endangered old-growth forests on Vancouver Island.

The 40-minute film was produced by Victoria-based filmmakers Ecologyst Films in spring 2021. The documentary’s producer says the film addresses concerns over continued logging of ancient forests in B.C. and the issue of land rights facing Vancouver Island’s First Nations.

“When we looked deeper into it, there is the issue that the (B.C.) government is giving land away to companies that isn’t theirs,” said Before They Fall producer Momme Halbe.

“That is really the underlying issue with old-growth logging here on Vancouver Island, because licenses are being given out on lands that shouldn’t be given out,” he said. “They are unceded territories of Indigenous Nations and they have never ceded their land and this is something that people in British Columbia need to understand.”

“We felt we needed to talk to the people who have been working on the frontlines for a very long time and understand what the issue really is,” said Halbe. “For us, its important that we elevate voices that otherwise are not heard and predominately those are Indigenous voices.”

One of those voices is Chief Makwala (Rande Cook) of the Ma’amtagila First Nation. He says the documentary is important because it allows all voices to come together to express concern for what is happening in the natural environment on Vancouver Island.

“We have lived on the land for thousands of years and even though we have been removed and pushed away from a lot of our traditional territories and onto reserves, we still heavily rely on the land,” said Chief Makwala. “For me as an Indigenous person, I can draw on an ancient philosophical perspective that we’ve lived in for thousands of years and if I can share that with non-indigenous people and welcome them … it shows the collaboration and it shows unity on the work that needs to be done. And that is the act of reconciliation, when we put the needs of the planet first because we need to start thinking of the next 100 years forward for the betterment of the next generations.”

The documentary also touches on possible solutions to the issues surrounding the continued harvesting of endangered old-growth forests. The film explores the potential of transitioning away from old-growth in future logging and the need for Indigenous sovereignty on traditional territories of Vancouver Island First Nations.

“The film for us is important, but it’s even more important that the message gets out,” said Halbe. “I think we see logging as an industry that we need to sustain and while that is true that we need jobs for people, we’ve also got to evolve the industry to higher standards, which is simply not happening.”

Before They Fall will make its world premiere at the Whistler Film Festival on Dec. 3. For more information, visit the Ecologyst Films website.