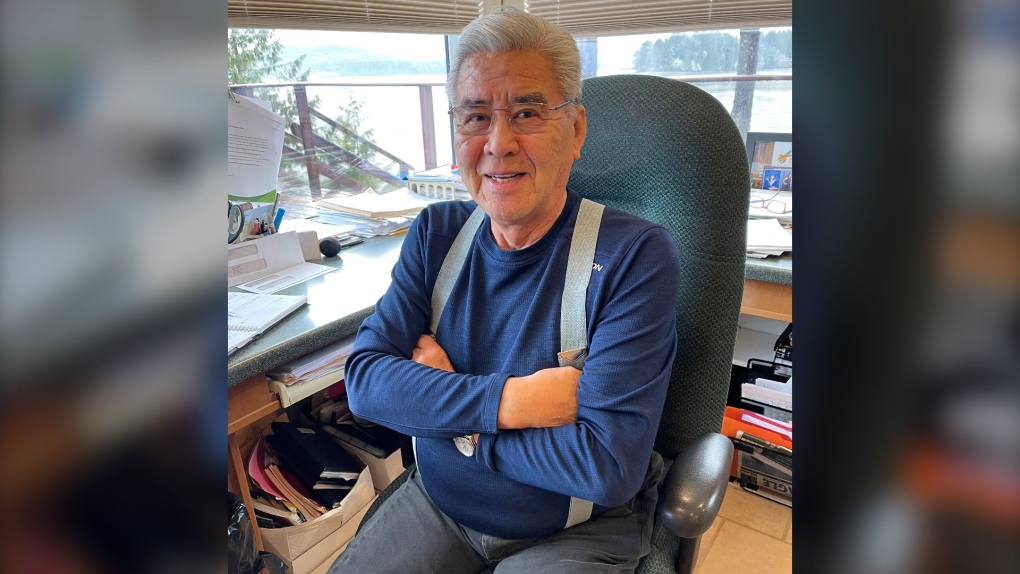 James Walkus poses for a handout photo on Friday, Feb. 19, 2021. Walkus says he sees both sides of British Columbia's salmon industry as a commercial fisherman and a salmon farmer and he's convinced the two can co-exist. THE CANADIAN PRESS/HO-James Walkus

VICTORIA -- As a commercial fisherman and salmon farmer, James Walkus says he sees the merits of both industries and he's convinced the two can coexist.

The 81-year-old Indigenous leader and entrepreneur from Port Hardy said wild salmon has provided him with a way of life for decades, but he supports the expansion of aquaculture and opposes the federal government's decision to phase out almost 20 salmon farms on northern Vancouver Island within 18 months.

Fisheries Minister Bernadette Jordan's announcement last December to phase out open-net fish farming in the Discovery Islands area has stirred emotions in Vancouver Island communities, with some fearing dire economic consequences and others saying the survival of wild salmon stocks is at stake.

Walkus said the bulk of his business is now with aquaculture companies, but he has been fishing waters off Vancouver Island since 1954 and wild salmon stocks have been declining due to a variety of factors. To blame it all on fish farms is not fair, he said.

“Our wild stocks have so many predators - the sea lions, the harbour seals, commercial fishermen, climate change, no feed.”

The Cohen commission on the decline of Fraser River sockeye in 2012 said the Discovery Islands act as a bottleneck along wild salmon migration routes and eliminating the fish farms was a key recommendation.

The recommendation was also contingent on Fisheries and Oceans finding more than a minimal risk to migrating sockeye by September 2020.

The industry, believing it was meeting the recommendation of the commission, did not expect the federal minister's decision to phase out the farms, said John Paul Fraser, executive director of the B.C. Salmon Farmers Association.

“Innocent people, companies, small businesses and Indigenous communities are sitting on a potentially catastrophic impact that will at the very least contribute to significant job loss and tension in communities when it doesn't need to be there,” Fraser said.

The association cited a preliminary analysis of the economic impact of the closure of the Discovery Islands farms as up to 1,500 lost jobs and an annual direct and indirect income loss of about $380 million.

But Fisheries and Oceans Canada said in a statement the communities, leaders and industries knew a decision on the future of fish farm operations was imminent.

“The decision to phase out fish farms in the Discovery Islands was made by minister Jordan after much consultation,” the statement said. “Those in the region and those involved would have known months prior, if not years, that a final decision would be made by December 2020 regarding the future of the farms.”

The statement said Fisheries and Oceans completed nine risk assessments in the area and announced last September that Jordan would consult with seven First Nations about the future of the fish farms before their December 2020 licence renewal dates.

The statement also cited the Cohen commission's 2012 recommendation that fish farm licences only be renewed on an annual basis.

Bob Chamberlin is an Indigenous leader who helped negotiate a B.C. government fish farm policy in the Alert Bay area of Vancouver Island and served as a consultant to First Nations involved in the Discovery Islands talks. He said industry leaders knew since the last federal election, and as far back as the Cohen commission, that the future of the farms was not certain.

“What (industry leaders) are doing is playing to the emotions of people,” he said. “They're unhappy with the decision. I think there were plenty of signals that they should have been perhaps preparing an alternative business plan than status quo.”

Chamberlin called on the federal government to provide assistance packages and retraining options to the people who will lose jobs with the closure of the fish farms.

Mayor Martin Davis of the small west Vancouver Island village of Tahsis said his community adopted a resolution more than a decade ago to reject fish farming within its municipal boundaries as an environmental policy.

“Most people in my town are opposed to fish farms,” he said. “I'm reflective of the majority in our community for sure. Really, in my opinion, the writing's been on the wall that things were going to start to move this way and the companies should have been repositioning themselves.”

Campbell River Mayor Andy Adams said as the leader of the city that bills itself as the salmon capital of the world, the phase-out decision appears short-sighted.

The city employs the majority of the salmon farm workers and the federal government should have considered a forward-looking approach to the industry, he said.

Amanda Luxton, an assistant manager at the Big Tree Creek Hatchery near Campbell River, said the government should look to find a balance between rebuilding wild salmon stocks and supporting aquaculture.

Luxton, 29, said she and the 16 other people working at the hatchery, which raises young Atlantic salmon for the farms, are worried about their futures.

“I'm 100 per cent nervous, as is everybody else,” she said. “I recently bought a house in Campbell River. I put down roots here and to have that possibility of uncertainty that I may have to go back east, that is a tough reality.”

This report by The Canadian Press was first published Feb. 20, 2021.