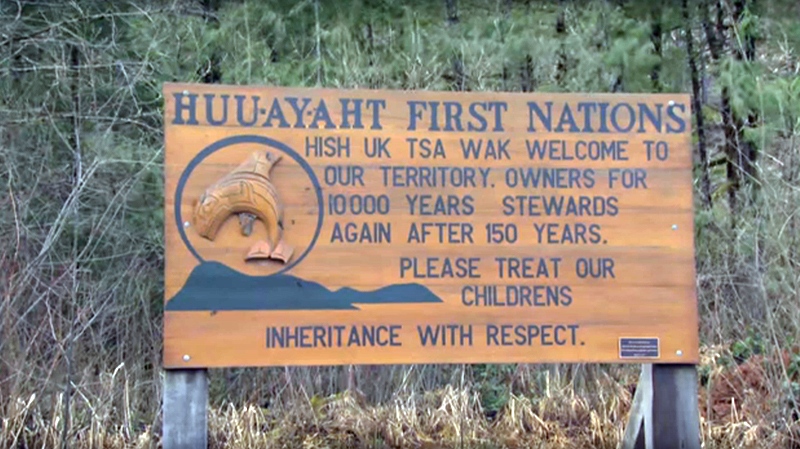 A sign is seen on Huu-ay-aht First Nation territory on Vancouver Island in this undated still taken from YouTube.

VANCOUVER -- The federal government announced Friday that it would be providing nearly $7 million for the construction of 19 affordable homes in two Vancouver Island First Nations.

The funding is part of the projects stream of the federal Rapid Housing Initiative, a $2.5-billion program intended "to address the urgent housing needs of vulnerable Canadians by providing them with permanent affordable housing," according to a news release from the Canada Mortgage and Housing Corporation.

The federal government has approved another $1.5 billion for the program in its 2021 budget, according to the CMHC.

The Huu-ay-aht project will bring the total number of new homes built on the nation's land to 22, said Chief Councillor Robert J. Dennis Sr. in the news release.

"We have made a commitment to our people to create a safe, healthy place to live where they can connect with the land and their culture," Dennis said. "Thanks to the timely contribution from CMHC, we are able to offer affordable housing to more of our citizens so they can move home and enjoy our wonderful homeland.”

Chief Charlie Cootes of the Uchucklesaht Tribe Government shared a similar sentiment in the CMHC release, describing the project as "true reconciliation."

“The Rapid Housing Initiative came just in time as every house in the village of the Uchucklesaht people was deemed unlivable," Cootes said. "With this funding, we will see eight new homes built and make it possible for eight families to move back home."

The Rapid Housing Initiative is part of the federal government's National Housing Strategy, and is administered by the CMHC.

This story has been updated to reflect the total value of the federal program. It is $2.5 billion, not $2 billion.