A fast-moving brush fire burning along Sooke Road has been contained after destroying one home, according to officials.

A home that was evacuated due to the blaze, a small cabin with a thatched roof, later caught on fire and was destroyed but the homeowner was accounted for.

Four additional fire departments were called in for mutual aid.

The BC Wildfire Service confirmed just before 5 p.m. that it had also dispatched two initial attack crews, one officer and two medium helicopters to bucket water onto the flames.

Just after 6 p.m., Dunlop confirmed the blaze had been 100 per cent contained and was only smouldering.

They confirmed no one had suffered any injuries in the blaze.

While officials haven't identified a cause, an electrician working in Sooke said his apprentice drove behind a motorhome that appeared to be dragging something behind it, shooting sparks into the bush along the road.

Dave Del Castillo said as he was heading home from work, his apprentice who was about five minutes ahead of him on Sooke Road called him.

"He said there was a motorhome about three cars in front of me that was...shooting molten metal into the bush," Del Castillo said. He said his apprentice recorded the vehicle's licence plate number and reported it to police.

Fire officials also confimed that when crews first arrived, there were multiple, smaller spot fires burning along the road for about a two-kilometre stretch.

Witnesses described the fire as burning in several spots and said winds spread the flames quickly.

Staff at nearby WestCoast Tire & Wheel reported that customers came into the shop and asked them to call 911 due to the blaze up the road.

Some staff members left with fire extinguishers in hand to try to hold back the fire until firefighters arrived on scene.

Sooke Road was expected to remain shut down in both directions and traffic delays were expected with an estimated reopening time of 8 to 9 p.m.

Traffic was being turned around eastbound at Gillespie Road and westbound where the route splits into four lanes. 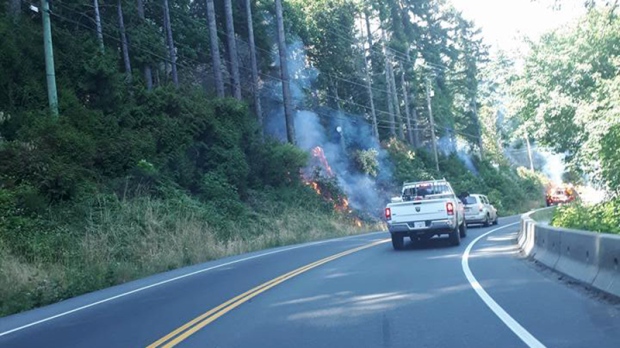