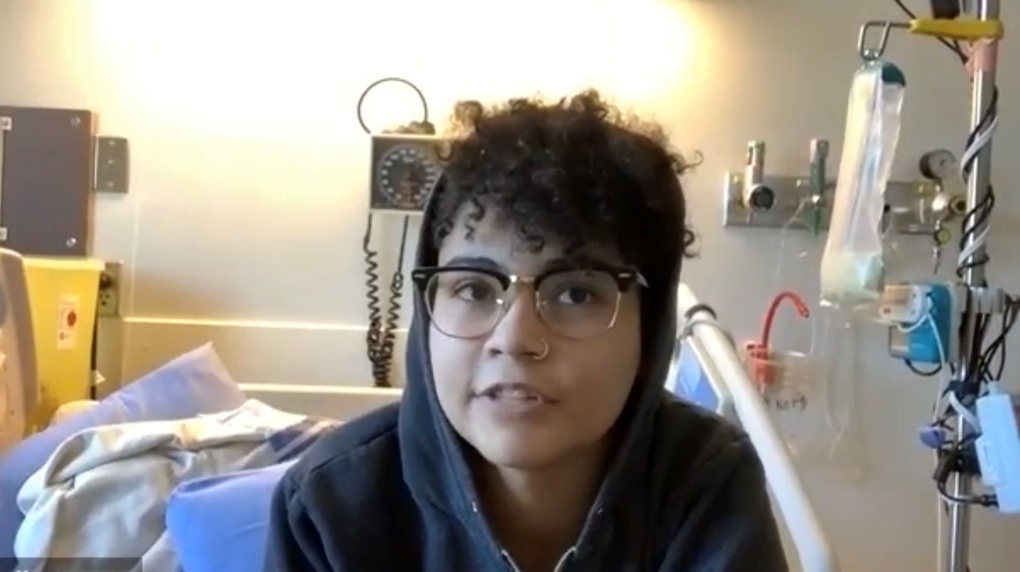 Dez Young has to feed through a J-tube due to life-saving chemotherapy he had underwent as child to treat his leukemia. (Dez Young)

VICTORIA -- The Young family are days away from marking a grim anniversary for their son.

“This Saturday marks one year since we’ve been in the hospital,” says Arabella Young, the mother of 19-year-old Dez Young.

Dez has to feed through a J-tube due to life-saving chemotherapy he had underwent as child to treat his leukemia.

His stomach doesn’t function properly and food now has to be sent directly into his intestines. When that feeding tube breaks, he can at times go for weeks without nutrition, surviving on only a saline drip.

A week and half ago, Dez was placed on a total parenteral nutrition (TPN) drip which provides nutrition directly into his veins. It’s a measure that will bring his energy levels up, while he waits for a new tube.

“It’s definitely not ideal especially because my digestive system obviously isn’t working perfectly already and we want to preserve as much function as possible,” said Dez.

Long-term TPN use can also come with complications for liver and kidney function.

Dez says what he and other young people in his situation need is more timely access to interventional radiology.

Dez went on to say that the main reason his procedures continually get bumped is because interventional radiology isn’t open on weekends and weeknights.

Island Health will call in someone during off-hours but only for an emergency. His case is not classified as an emergency.

“Due to privacy laws, we cannot discuss or disclose details about individual patients or the care they receive,” the health authority said in a statement.

Island Health was presented with a letter of permission from the Young family to discuss the situation.

Dez is feeling optimistic about his recent meetings with hospital management.

“We’re hoping that we’ll be able to come up with a better plan but at this point is hard to say,” said Dez.

As for when Dez will be able to leave the hospital, after spending the last year within its walls, his mother says that’s unclear because at this time, the system isn’t able to support Dez outside of a hospital setting.

“Right now it’s the doctors and nurses trying to find pieces of community care, to take care of aspects of Dez’s care,” said Arabella. “Right now there is no over-arching program for chronic care for young adults.”

Arabella is hopeful that her advocacy will lead to change and that Island Health is listening.