A severe windstorm that knocked out power to virtually the entire west coast of Vancouver Island and left tens of thousands of customers in the dark has turned fatal in Duncan.

The BC Coroner's Service confirmed it was investigating a death in the Cowichan Valley community related to a tree that fell in Thursday's windstorm.

The service would only confirm it was investigating a death in Duncan and that it involved a toppled tree.

Details about the victim or exactly where it happened are not yet known.

The coroner's service said it expected to provide more detail on Friday.

The day began with Environment Canada issuing wind warnings for the entire island and B.C.'s South Coast Thursday morning, saying gusts could reach speeds of up to 100 kilometres an hour on the west coast.

That prompted BC Ferries to cancel dozens of sailings on all of its major routes, closures that were expected to extend into the evening Thursday. Read more about ferry cancellations here.

As of 4:45 p.m., wind had knocked out power to more than 137,000 customers on Vancouver Island, including all of Ucluelet and Tofino, according to BC Hydro.

Officials in Tofino, known as a storm-watching destination, issued a release asking tourists and locals to stay indoors as the storm intensified.

In the Alberni Valley, rising water in the Somass River caused even more danger. The Tseshat First Nation issued a local state of emergency as river levels rose.

The Joint Rescue Coordination Centre said the Coast Guard was called to rescue four people after a pair of float homes broke free from the Maple Bay Marina and floated into the Saanich Inlet.

It ended up being a local vessel that came to the rescue, retrieving the four people trapped on the float home at around 11:30 a.m.

"We reached peak winds of about 120 kilometres an hour and it started scattering debris and breaking up some of the older docks here," said marina general manager David Messier.

The float homes ended up drifting across the inlet to the Saanich Peninsula side before they were secured by the Coast Guard, he said.

"This is by far the biggest windstorm we have ever experienced here," said Messier. "The speed and the high tides combined to really put us in a bad spot." 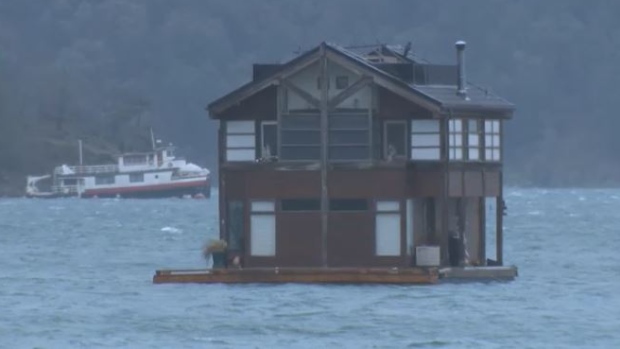 A pair of float homes broke free at Maple Bay Marina in the Cowichan Valley with four people still aboard one of them. Dec. 20, 2018. (CTV Vancouver Island)

Power outages were occurring in seemingly every major city on the island, including the Saanich Peninsula, Victoria, the West Shore, Duncan, Lake Cowichan, the Comox Valley and as far north as Port Hardy.

In the Capital Region, businesses also lost power including all of Saanich's Uptown Centre and Butchart Gardens in Central Saanich.

A falling tree crushed a vehicle in motion along Saanich Road, but miraculously, no one was injured.

The SUV was driving on Saanich Road between Greenridge Crescent and McKenzie Avenue in the early afternoon when the tree fell directly onto it.

Saanich police said traffic in the area was diverted and asked motorists to use alternate routes while crews cleaned up the mess.

Around the same time, another tree came down in southbound lanes of the Pat Bay Highway at Keating Road, bringing traffic down to one lane.

Back on the west coast of the island, which remained powerless early Thursday evening, BC Hydro spokesman Ted Olynyk said the company believes a transmission line was taken out in the storm.

"The whole west coast is out, so it certainly would impact our ability to get crews out there if where we need to be is passed where the trees are down," Olynyk said.

There were reports of power lines downed in other communities, including Herd Road near Lakes Road in Duncan.

The wind also led to major ferry cancellations on most of BC Ferries' major routes, including its Swartz Bay-Tsawwassen route up until at least 7 p.m.

Environment Canada said it expected winds to ease Thursday night as the storm leaves the region.