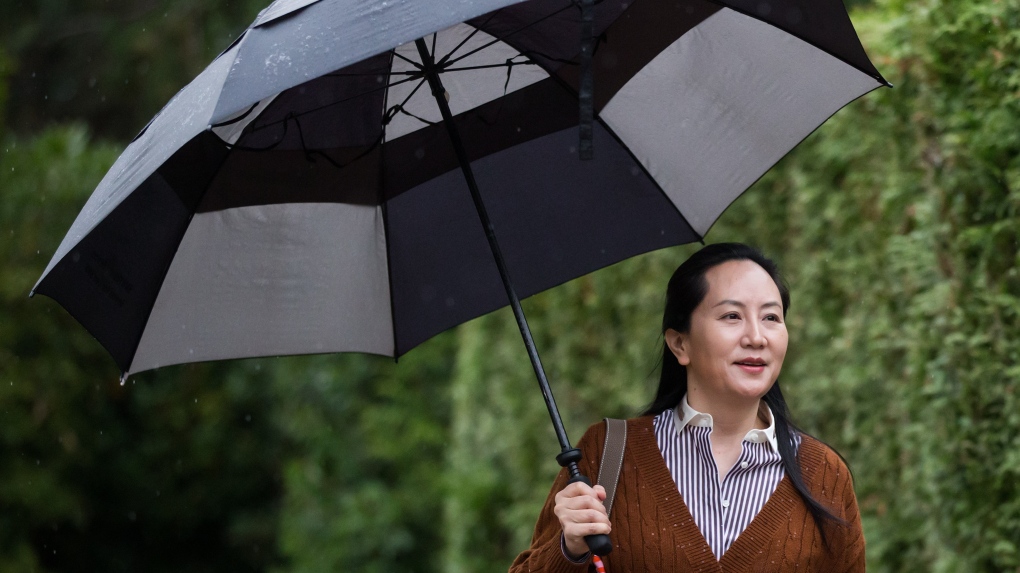 Huawei chief financial officer Meng Wanzhou, who is out on bail and remains under partial house arrest after she was detained last year at the behest of American authorities, carries an umbrella to shield herself from rain as she leaves her home to attend a court hearing, in Vancouver, Thursday, Oct. 3, 2019. THE CANADIAN PRESS/Darryl Dyck

VANCOUVER -- A court hearing begins today in Vancouver over the American request to extradite an executive of the Chinese telecom giant Huawei on fraud charges.

The arrest of Meng Wanzhou in 2018 fractured relations between Canada and China.

At issue at this week's hearing is the legal test of double criminality, meaning if the allegations are also a crime in Canada then Meng should be extradited to the United States.

Meng is accused of lying to a bank about a Huawei subsidiary's business in Iran, putting the financial institution at risk of violating U.S. sanctions against the country.

Her lawyers have argued that the allegations do not amount to fraud and Canada does not have similar sanctions against Iran.

Meng, who's free on bail and living in one of her two multimillion-dollar homes in Vancouver, denies the allegations.

If the British Columbia Supreme Court judge decides the legal test has not been met, Meng will be free to leave Canada, though she'll still have to stay out of the U.S. to avoid the charges.

If the judge finds there is double criminality, the hearing will proceed to a second phase.

That phase, scheduled for June, will consider defence allegations that Meng's rights were violated during her arrest at Vancouver's airport.

China has detained two Canadians and restricted some imports including canola, moves that are widely seen as retaliation for Meng's arrest.

This report by The Canadian Press was first published Jan. 20, 2020.