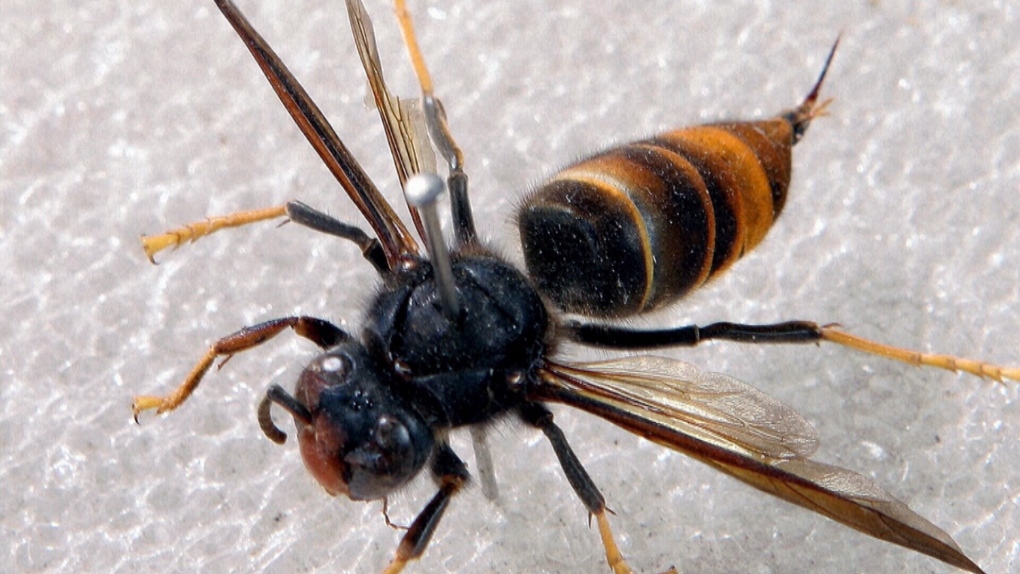 Anyone who thinks they've spotted one of the invasive thumb-sized hornets is asked to report it immediately. (CTV News)

The Asian giant hornet is back in B.C. after first being spotted in the province last year. Experts are now trying to determine how many nests might be in the ground and where they might be.

“All that signifies is that this beast has been travelling or been spreading a bit farther than we had anticipated up to this point,” he said. “The scenery hasn't really changed very much.”

Three giant hornets were first spotted last August near Nanaimo, the B.C. agriculture ministry said. The single nest was destroyed. A specimen was found in November in White Rock and two specimens were found last December at Blaine, Wash.

Van Westendorp said he has frozen the Langley specimen and will eventually conduct an examination to see if it's a queen. The insect will also be analyzed through DNA sequencing to determine its geographic origin.

The province issued an information bulletin in March asking residents near the border to be on the lookout. Hornet traps were placed throughout the area and pest-alert notices were distributed.

Further monitoring will continue and experts are asking for the public's participation to report what they see.

“You're going to see it because you see the Asian giant hornets heading to that hole in the ground ... so being on the alert for the hornets is the first step to finding the nest.”

Normally found in the forests and low mountains of eastern and southeast Asia, it remains unclear how the giant hornets arrived in North America.

“Even under the best of circumstances, there's so few of them around, this is kind of like looking for a needle in a haystack,” van Westendorp said from Abbotsford. “And that's why we rely on the reports to come in to get an overall impression as to what the distribution is.

“If we can find and catch live adults, then we can put on radio tags and follow them to find their nests. But up until this point we have only collected dead ones. Well, dead ones cannot bring us to their nest and that is the problem.”

The Asian giant hornet (Vespa mandarinia) can be as big as a man's thumb. It has a large orange head, black eyes and can deliver a nasty sting.

“Because of the development cycle of this insect, we anticipate more sightings in the weeks and months to come,” van Westendorp said. “All that is now a bit different is that with the latest find in Langley, it is now recognized that it has perhaps a broader distribution here in coastal B.C. than we had anticipated up to this point.”

The “murder hornet” moniker - a term experts frown upon - was coined in Japan.

British Columbia classifies the Asian giant hornet as a “serious honey bee predator.” Farmers in the southern B.C./northern Washington area depend on honey bees to pollinate crops such as apples, blueberries and cherries.

“The (hornets) prey on bees, et cetera, and there's nothing that preys on it,” Wallin said from Williams Lake, B.C. “You don't want it to establish because it will have a ripple effect to the ecosystem.”

Area beekeepers are being encouraged to use screens or barriers to protect their hives. The Asian giant hornet is not currently a pest regulated at the federal level, so it falls under the mandate of the province, the Canadian Food Inspection Agency said earlier this month.

“There isn't any evidence yet that these hornets have become fully established,” said Gard Otis, an adjunct professor at the University of Guelph specializing in bee behaviour and forest entomology. “But the fact that a new hornet was found (in a different location) is a concern also because that could be a different source colony or something.

“So we're all concerned but I don't think we're like screaming out of the room and really upset because things right now, at this particular moment, are not bad.'

The hornet's life cycle begins in April when queens emerge from hibernation, feed on sap and fruit, and look for underground dens.

“I'm not saying it will, but even if this pest can establish itself here on a permanent basis, we are only dealing with very, very few,” van Westendorp said. “There is an exceedingly low density, if I can call it that.

“As an apex predator, there is simply not enough room, if you will, for a lot of them to be proliferating. I think that's the key message here.”

Asian giant hornets hunt insects and are generally not looking to engage with people, pets or large animals, the B.C. agriculture ministry said.

“In the eyes of a hornet, (humans) are totally inconsequential ... it is only when a nest is disturbed that they pose a risk or a threat,” van Westendorp said.

This report by The Canadian Press was first published May 29, 2020.