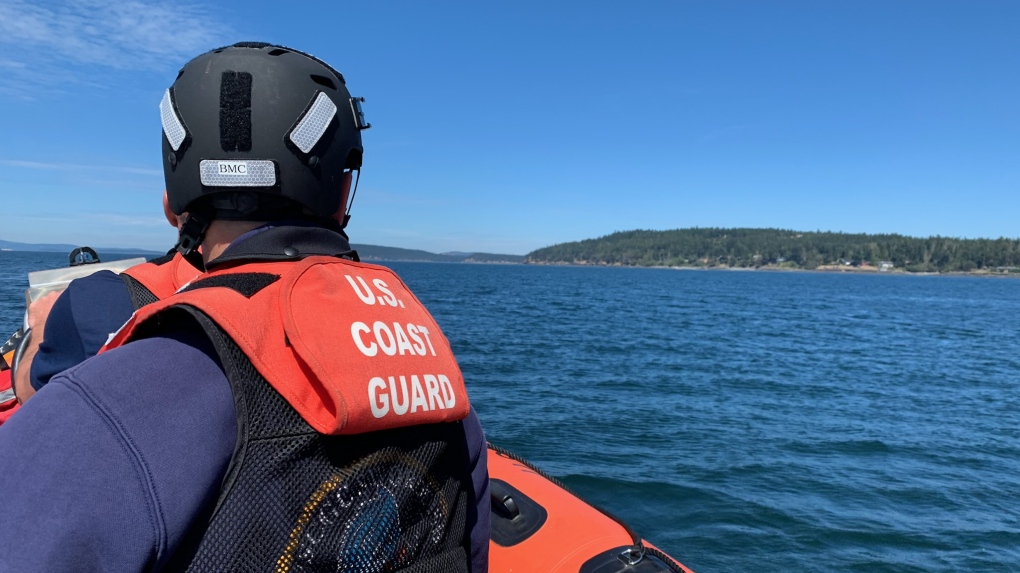 The U.S. Coast Guard first responded to the sinking vessel on Saturday. (USCGPacificNW/Twitter)

A fishing boat that sank with nearly 10,000 litres of fuel on board near the Canada-U.S. marine border went down in one of the worst possible places for endangered orcas, an ocean pollutants expert says.

Peter Ross, a senior scientist with Raincoast Conservation Foundation, said the vessel sank in an important feeding area for endangered southern resident killer whales. It will be a race against time to clean up the spill, he said.

“The very worrying part of this entire incident is that it happened probably in the worst place of all for southern resident killer whales, right in the middle of critical habitat,” Ross said.

The area is protected under the U.S. Endangered Species Act, he said, because it's a popular fishing spot for the orcas. Chinook salmon, the whales' main prey and a species facing its own survival challenges, swim along bluffs on San Juan Island, creating a feeding channel for the orcas, he said. 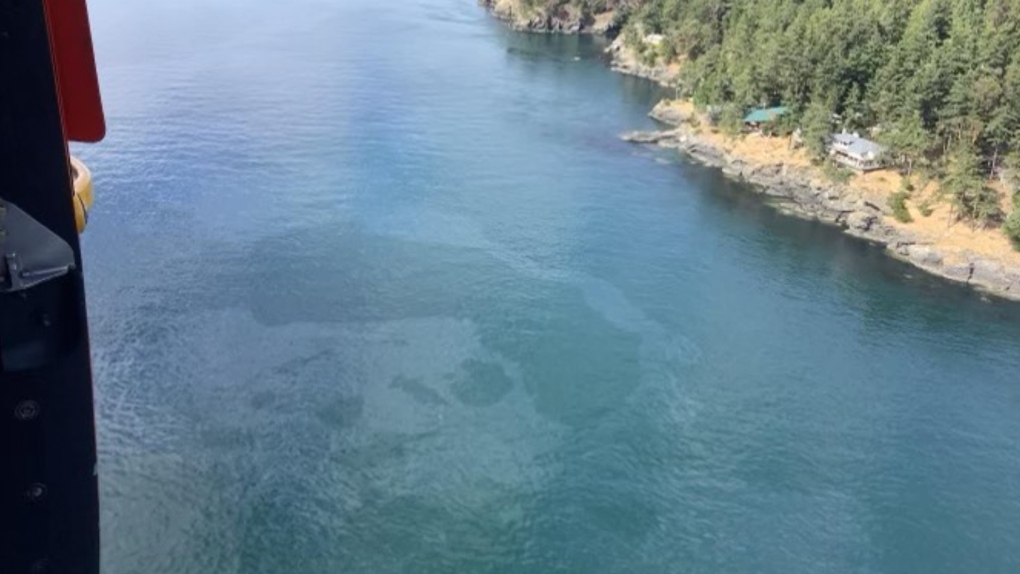 The U.S. Coast Guard and other American agencies are responding to a sunken vessel leaking fuel in Haro Strait, between Vancouver Island and San Juan Island. (Twitter/@USCGPacificNW)

There are only 74 southern resident killer whales remaining and the federal government says the main threats to the species are contaminants, declining chinook populations and acoustic disturbances.

The U.S. Coast Guard said Monday the whales were last spotted west of Port Angeles, at least 50 kilometres from the spill site, but Ross said that's not more than a day's journey for the orcas.

The Aleutian Isle sank Saturday off San Juan Island, roughly 25 kilometres east of Victoria, and its five crew members were rescued by a Good Samaritan, the U.S. Coast Guard has said.

The vessel is under about 30 metres of water and the fuel on board included diesel, motor oil and other assorted oils. Officials have not determined what caused the sinking.

On Monday, the coast guard's Pacific Northwest division said a dive team was looking for the best way to secure vents on the vessel so that the tanks can be defueled.

Petty Officer Michael Clark told The Associated Press that a sheen had entered Canadian waters and there was concern for the southern resident killer whales last seen near the southern tip of San Juan Island but moving away toward Port Angeles.

By Monday afternoon, they were spotted west of Port Angeles, “well away from the spill,” the coast guard said.

A safety zone has been put in place around the response area and all vessels must remain at least 914 metres from any diving vessels, it said.

No whales have been identified in the affected area and personnel are on scene to prevent marine mammals from approaching.

There have been no reports of oiled wildlife and air quality levels remain below harmful thresholds, it said.

However, Ross warned that the threat is not over. If the whales return to the area, diesel fumes can be “extremely toxic” to them if inhaled. The risk depends on volume and wind levels at the time of exposure.

“That can present significant harm, if at the right concentration, and if there's no wind to disperse it,” he said.

Diesel can also enter the food chain, beginning on the biofilm on the ocean water's surface, if it's ingested by bacteria, phytoplankton and zooplankton.

Of urgent concern, too, is identifying exactly which types of oil and other fuels were on board the boat, he said. Given the threats facing the endangered whales, it's critical that divers identify the fuels, stop the leaks and even possibly work on recovering the vessel, he said.

“This is an environmental emergency,” he said.

Conservationists are also watching for effects on salmon, but they may depend on how officials handle the leak.

Misty MacDuffee, director of Raincoast's wild salmon program, said the leak is occurring as sockeye salmon and other migrating species are returning to the Fraser River.

The fish should be safe from fuel on the water's surface since they spend most time deeper down.

However, she warned against the use of dispersants to manage the oil because it involves breaking slicks into smaller droplets that can distribute toxins through the water column.

“Then it becomes deadly,” MacDuffee said.

Oil can also accumulate on shorelines with damaging effects, she said.

The Canadian Coast Guard said in an email it is ready to assist as required while several other U.S. agencies are also helping contain any oil, track the trajectory of the spill and monitor for affected wildlife.

Lt.-Cmdr. Brian Dykens said in a statement that government and industry partners are working to develop “an efficient and effective containment and recovery response.”

“The local public, the environment and protected marine species are our top priority,” he said.

- With files from The Associated Press

This report by The Canadian Press was first published Aug. 15, 2022.

North Korea on Sunday fired a short-range ballistic missile toward its eastern seas, extending a provocative streak in weapons testing as a U.S. aircraft carrier visits South Korea for joint military exercises in response to the North's growing nuclear threat.