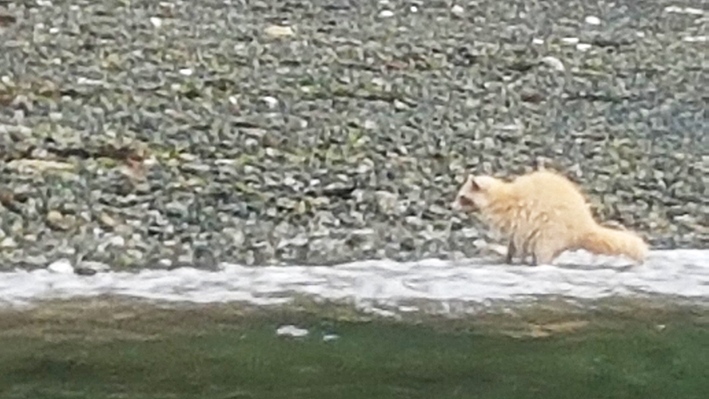 A kayaker got an up-close glimpse of a local legend when he spotted a rare blonde raccoon on Newcastle Island, just across from Nanaimo. Sunday, June 3, 2018. (Courtesy Murray Helmer)

A kayaker got an up-close glimpse of a local legend when he spotted a rare blond raccoon on an island just across from Nanaimo.

Murray Helmer was paddling around the north end of Newcastle Island Marine Provincial Park on Sunday when he saw a group of raccoons on the shoreline.

"Just as I came into the last stretch just around the north end, there were a few groups of raccoons down on the beach digging for clams," Helmer said. "Among them there was a white one, which I've heard is a champagne raccoon."

Helmer said he felt fortunate to have found the elusive animal for the first time after paddling around the island for years. "To get to see one, I felt really lucky and special," he said.

Despite their ghostly appearance, blond raccoons are not the same as albino raccoons because their eyes are not pink, according to retired BC Parks biologist Bill Merilees.

Though the unusual animals are considered quite rare, there is a higher concentration of them on Newcastle Island, according to Merilees.

"This is a recessive gene that some of the raccoons on Newcastle have, and the presence of this gene is much more common on Newcastle Island than many other places," he said. "Every once in a while, maybe one animal in 10, 15, 20, comes up with this beautiful sort of blond colour."

Much like the Kermode or spirit bear, the blond raccoon's striking colouring occurs when two adults mate that don't carry the gene responsible for the production of black pigment.

Twenty-five percent of the time, those parents produce blond offspring.

Other than their colour, they behave and interact the same as any other raccoon, Merilees said.

It's something that Helmer can attest to.

"[It was] kind of the more aggressive one," Helmer said. "Running around, chasing the other raccoons, and hissing and fighting with them."

Feeling lucky to have found the blond raccoon, Helmer snapped some photos and posted them on Facebook, where they were shared dozens of times.

"It's really quite shocking. I didn't realize people liked raccoons this much," he said. "It's the most popular thing I've done online."

The elusive "blonde" raccoon from @NewcastleIsland in #Nanaimo was photographed by a kayaker on Sunday afternoon. While getting shots from a distance of the beach it was seen on today, I may have captured it as well. Take a look. @CTVNewsVI pic.twitter.com/85WdKJqUSE 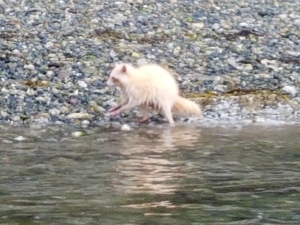