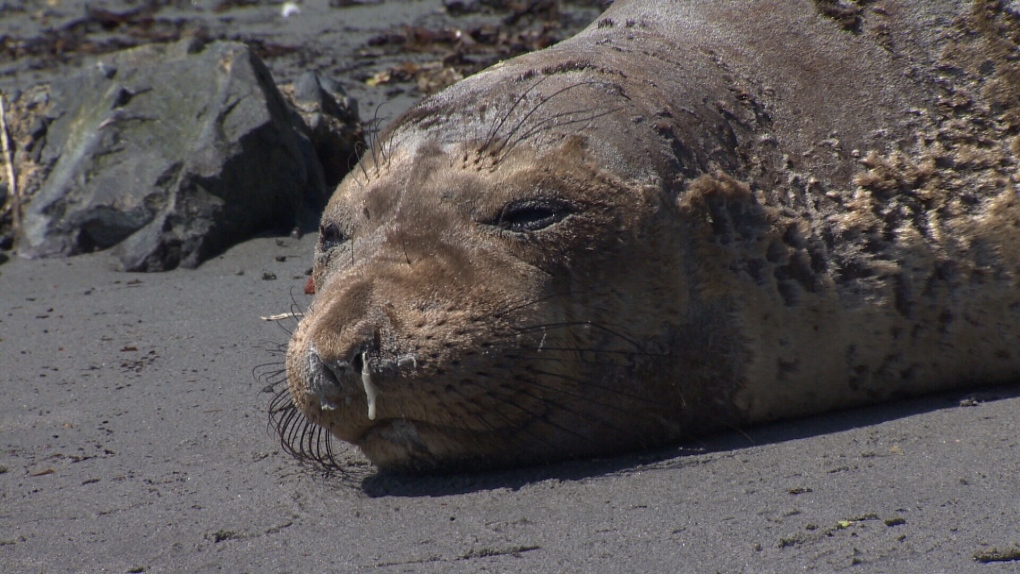 Signs and caution tape have been put up around a moulting elephant seal at Victoria's Gonzales Beach warning the public to keep their distance. April 27, 2018. (CTV Vancouver Island)

Don't mess with the seal.

That's the message from the Department of Fisheries and Oceans after a moulting elephant seal turned up on Victoria's Gonzales Beach this week.

Signs and caution tape have been put up around the seal warning the public to keep their distance.

The DFO says when moulting, elephant seals can appear to be very sick, but it's reassuring the public that it's a natural process that shouldn't be interfered with.

All elephant seals spend one month per year on land to moult, in which they shed all of their fur and the underlying layer of skin.

"For just over a month, the seal is confined to land and spends most of its time dozing and lazily flipping sand onto itself to stay cool. It doesn’t eat and may lose up to 25% of its body weight," the DFO said on its website.

The agency says people should also keep their distance for their own safety, as elephant seals can weigh up to 2,300 kilograms and measure as long as five metres.

While they may look slow and harmless, the animals are capable of moving quickly and could be dangerous if they feel threatened.

Elephant seals are regular visitors to B.C.'s coast in spring and summer, and those seen closer to B.C. shores are often juvenile or adult males, according to the DFO.

Anyone who sees a marine mammal that's abandoned, injured or being harassed is asked to report it to the BC Marine Mammal Response Network at 1-800-465-4336.