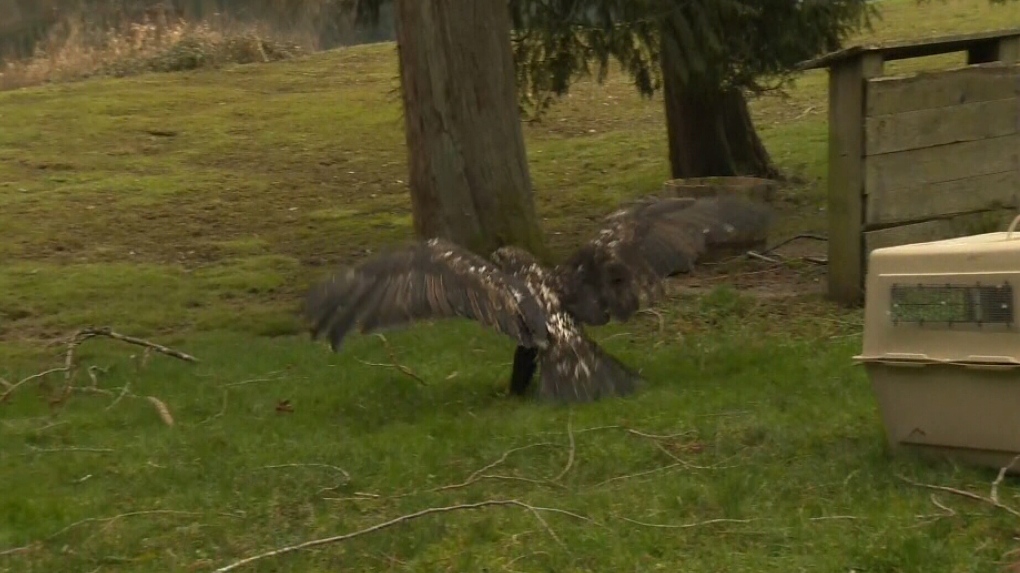 An eagle that nearly died after it was poisoned by possibly eating a euthanized animal carcass was released in Duncan Thursday, Jan. 31, 2019. (CTV Vancouver Island)

An eagle that was rescued after being poisoned was released back into the wild Thursday.

The Raptor Rescue society received calls about sick eagles in the Lake Cowichan area on Jan. 16. The organization was able to rescue six of the poisoned birds, and after recovering, two have been released.

“It’s moving, to see something have another shot and freedom again,” said Carolyn Green, a volunteer at the Raptor Centre.

The bald eagle was released in Duncan, B.C, close to where it was initially found. Isaac King with The Raptor Rescue Society says the release couldn’t have gone better.

“[The eagle] doesn’t like us, and that’s good,” King said. “He had a nice strong flight and a big long sore, found a nice perch, found his lay of the land, and now he’s moved on his way.”

Three eagles remain in care, and two are expected to make full recoveries. Sadly, The Raptor Rescue Society says that one bird died after being rescued, and another is suffering from a wrist injury that will leave him in care for an extended period of time.

Conservation officers believe the birds were poisoned after eating the carcass of a farm animal that had been euthanized. The Raptor Rescue Society says it’s never dealt with a poisoning of this magnitude. They say that eagle poisoning is rare, but when it does happen, it’s usually a result of human action.

“It’s really sad, a lot of the time the outcomes for [eagles with lead poisoning] is poor,” King said. “You really shouldn’t be using lead in any outdoor activity. It magnifies out into the environment and it kills scavengers and big predators like bald eagles.”

King hopes that people learn from the poisoned eagles, and look more carefully at what they’re putting into the environment.