Driver taken to hospital after trying to escape assailant in Cowichan Bay: RCMP 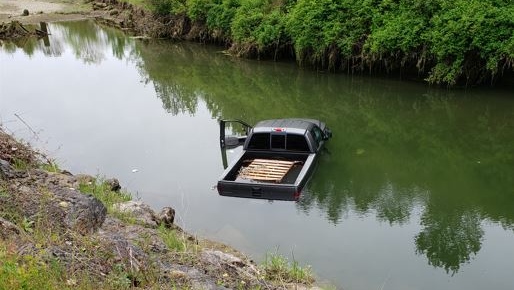 When police arrived, they found a vehicle submerged in more than a metre of water in a channel of the Cowichan River, the RCMP said. (Submitted)

One person was injured and taken to hospital Tuesday after they drove their vehicle into a section of the Cowichan River to escape from a man who was threatening them, according to the RCMP.

Mounties were called to Westcan Terminal Road in Cowichan Bay, B.C., around 10 a.m. following a report that a man was acting aggressively in the area.

When police arrived, they found a vehicle submerged in more than a metre of water in a channel of the Cowichan River, the RCMP said.

Around the same time, a resident called 911 to say that an unknown man was at their home and threatening to steal their vehicle, police said.

The man was found brandishing a replica weapon, according to police.

Officers arrested the man after a foot chase through a forested area, according to RCMP Sgt. Chris Manseau.

Police later determined the man they arrested had threatened the driver who ended up in the river, according to the Mounties.

The extent of the driver's injuries was unknown Tuesday afternoon.

The police investigation remains ongoing and charges are still being considered, police said.

Crown counsel is seeking to revoke the prior order that granted bail for Tamara Lich, an organizer of the 'Freedom Convoy,' and says he will argue for her to be detained.

The gunman who attacked an Independence Day parade in suburban Chicago fired more than 70 rounds with an AR-15-style gun that killed at least six people, then evaded initial capture by dressing as a woman and blending into the fleeing crowd, police said Tuesday.

The Bank of Canada's strategy of rapidly increasing its key interest rate in an effort to tackle skyrocketing inflation will likely trigger a recession, a new study from the Canadian Centre for Policy Alternatives (CCPA) says.

The annual gathering of the Assembly of First Nations is being held this week in Vancouver under a cloud of criticism from its national chief, who has been suspended and denied entry to the meeting.