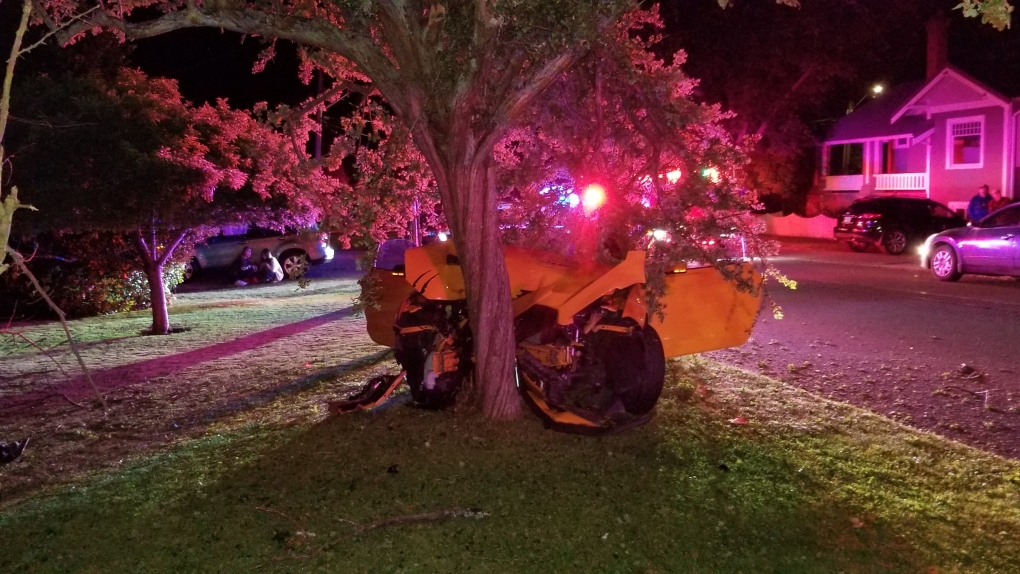 VICTORIA -- Police have determined that a passenger in a yellow sports car that crashed into an Oak Bay tree earlier this month was actually the driver.

The car, which car had bumper stickers that encouraged speeding, was totaled and two people were found injured inside.

After the crash occurred, police said that a novice driver, a 20-year-old woman, was behind the wheel of the yellow Mustang. Now, police say that a male who was inside of the car was actually the driver, and he is now facing criminal charges.

“We initially issued five tickets to the female driver. However, subsequent investigations revealed that the driver was actually a male who was in the car,” said Ray Bernoties, deputy chief of the Oak Bay Police Department.

“So, we have now removed the ticket from the female and we are going with criminal charges against the male now known to be the driver.”

Police say that they are considering criminal charges of obstruction and dangerous driving.

According to Bernoties, the obstruction relates to the initial crash, and the subsequent investigation.

Police say that the driver had likely consumed alcohol before the crash occurred.

“We believe in this case that the male had been consuming beverages from a local establishment and this was the cause for potentially the collision, but also for him to obstruct the investigation, to avoid an impaired investigation,” said Bernoties.

Police say that the Independent Investigations Office and the Office of the Police Complaints Commissioner were notified of the incident, as a police officer was in pursuit of the vehicle before the crash.

According to the Oak Bay Police Department, the crash occurred after an officer spotted the yellow Ford Mustang, which had bumper stickers that read “Street racing is not a crime, well it is, but f**k it,” and “Yes officer I did see the speed limit sign (I just didn’t see you),” travelling at roughly 73 km/h in a 40 km/h zone.

The officer then activated their lights and sirens. Shortly after, the car crashed.

Police are asking drivers to create a plan for getting home if they think they will be drinking, especially as the Canada Day holiday approaches.

“We encourage people to determine what their safe ride home plan is before they consume even a sip of alcohol,” said Bernoties.