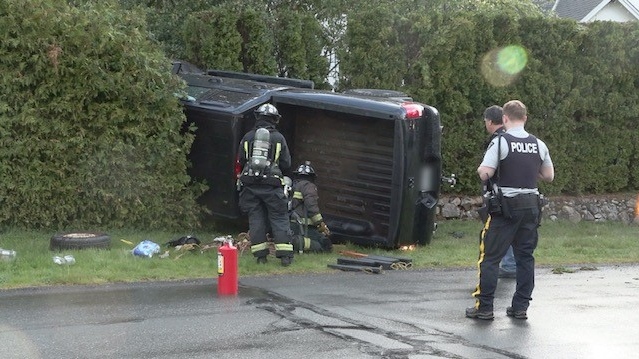 A quiet Comox, B.C., side street was the scene of an unusual motor vehicle incident Friday morning that led to fire concerns.

When the local first department was first called, firefighters were told that the vehicle was smoking and that a person was trapped inside with a fuel can nearby.

Captain Robert Stevens of the Comox Fire Department says thankfully it turned out to be less serious than expected.

"Any time a vehicle goes sideways there’s some potential, fluids tend to leak and you’ve got hot components of the engine so there’s potential for fire," Stevens said.

The vehicle landed on its side with the driver-side door facing the ground, and the truck had pushed itself partly through a hedge towards a home’s front yard. 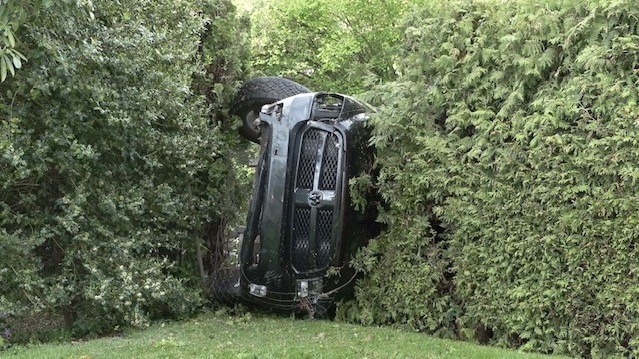 "There was a gas can in [the] back," said Stevens. "I’m not sure if the gas spilled from the accident but when I came across it, it was empty."

Firefighters secured the vehicle as the driver was being attended to by ambulance crews.

"Anytime a vehicle is on its side we need to walk around it and manage the situation. We always secure the vehicle and so that’s why we cribbed it up," said the fire captain.

The homeowner tells CTV News she heard the crash and rushed outside to provide assistance.

She was very shocked to see the young driver was able to remove himself from the vehicle by climbing out the passenger door.

"The driver was inside and he did explain that he got out of the vehicle on his own," said Stevens.

"He’s been looked at by ambulance and he’s still here, the ambulance has left."

After going for drinks this week, an unnamed worker lost a USB flash drive containing the personal details of every resident of the Japanese city of Amagasaki, according to a statement from the city's government.

A new study has found that breast cancer can metastasize more efficiently while people are sleeping, a finding researchers say could 'significantly change' the way cancer is diagnosed and treated.