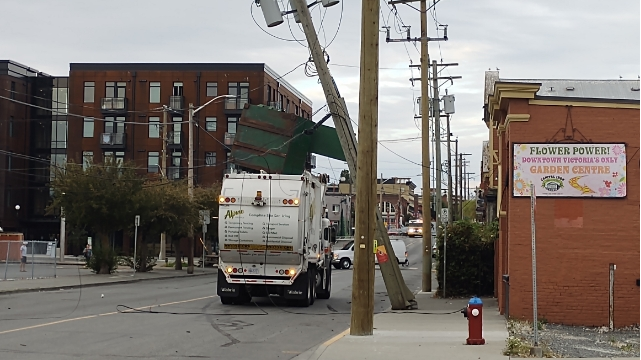 A witness tell CTV News that an Alpine Waste truck failed to lower its loading arms, which then got caught on powerlines: (Submitted)
Victoria -

Some downtown Victoria business have had to close for the day after a garbage truck ripped down hydro lines in the 1900-block of Store Street.

He says an Alpine Waste truck, that had just finished emptying a dumpster, failed to lower its loading arms, which then got caught on the powerlines.

"They drove away and they ended up taking down the powerlines," said Jeffery Stephens. "It caused a domino effect because all the wires came down on Discovery Street."

Stephen says crews working on the outage told him a hydro pole will have to be entirely replaced.

The power outage has cut power for residences and business in the northern part of the downtown core.

According to BC Hydro, about 500 customers have been affected in a four-block radius between Discovery Street and Fizgard Street, and as far east as Blanshard Street.

The energy provider estimates that power will be back on by 5 p.m. Thursday.

A crew is currently on site at an outage affecting 531 customers in #VictoriaBC. They're sharing updates here: https://t.co/P2080hWpMO pic.twitter.com/j1LpLTIbfE

BUSINESSES CLOSING FOR THE DAY

One of Victoria’s largest businesses has been forced to turn away customers and close down early due to the power outage.

"Unfortunately, we will have to be closed for the entire day," said Capital Iron chief operating officer Kylie Black.

"It means losing sales for us and at the end of the day we’re disappointing our customers by not being allowed to shop with us," she said.

Black says with no power inside the store, she has had to send retail staff from the Store Street location home for the day. She also has to cancel deliveries as well, which hurts the company's bottom line.

"It will definitely be in the ten of thousands for us," said Black. "We’ll put our staff to work as best as we can, but it won’t be a full day's worth (of work)."

Black says no power means the darkened store has no internet and no systems to get work done.

"Obviously with no electricity, (there) is a tripping hazard and we have to be very careful inside the store," she said.

"We’re doing the best that we can in this situation and we’re sorry we aren’t able to have people shop with us or complete their deliveries because sometimes things happen that are outside our control."

CTVNews.ca asked two experts to answer common questions submitted by readers about Pfizer’s COVID-19 vaccine for children aged five to 11. Here's a look at their responses.

Actor Alec Baldwin fired a prop gun on the set of a Western and killed the cinematographer, officials said. The director of the movie was wounded, and authorities are investigating what happened. A spokesperson for Baldwin said there was an accident involving the misfire of a prop gun with blanks.

Kid-size doses of Pfizer's COVID-19 vaccine appear safe and nearly 91 per cent effective at preventing symptomatic infections in 5- to 11-year-olds, according to study details released Friday as the U.S. considers opening vaccinations to that age group.