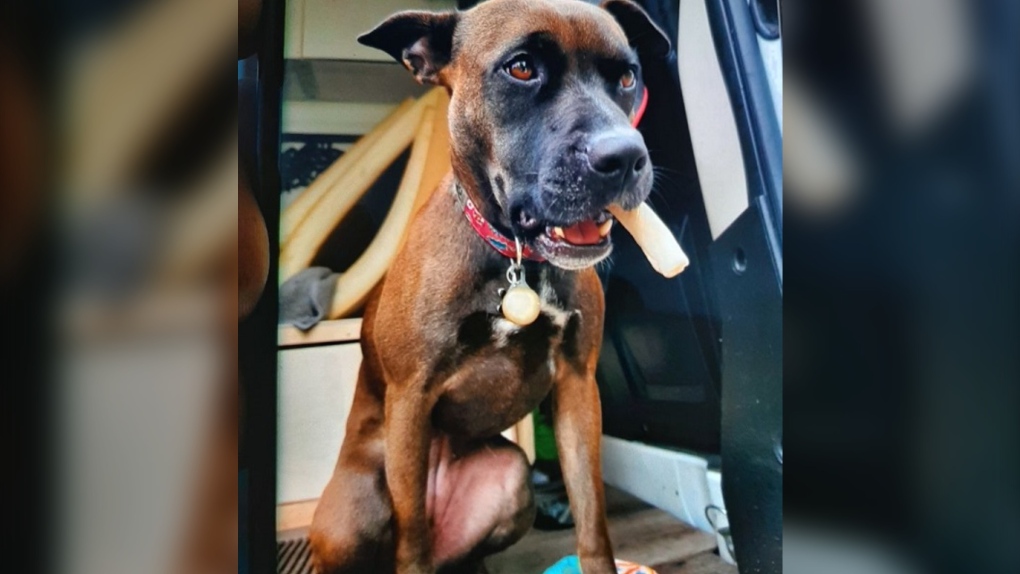 Police describe the lost dog as a brown pit bull named Camper. The dog wears a pink collar and was last seen in the 700 block of Government Street shortly after the incident, police said. (Victoria Police Department)

VANCOUVER -- Police in B.C.'s capital are asking the public for help finding a dog that ran away after its owner was attacked at random in the city Friday night.

Victoria police said officers were called to the 500 block of Pembroke Street shortly before 8 p.m. for a report that a man had smashed the driver's side window of a van with a hammer. The victim and her dog were inside the van at the time, police said.

Officers found the suspect nearby, at the intersection of Pembroke and Government streets, and took him into custody without incident, police said.

According to Victoria police, the suspect was heard screaming on the street before the incident. He first smashed the windows of a vehicle parked behind the victim's van, then moved on to her vehicle, police said.

The victim attempted to drive away, but the suspect began smashing her windows before she could escape, according to police.

"The victim and her dog then fled from her van out of the passenger side, while the van kept moving and collided with an additional parked vehicle," police said in their release. "The dog, frightened by the incident, ran away from the scene and has yet to be found."

Police describe the lost dog as a brown pit bull named Camper. The dog wears a pink collar and was last seen in the 700 block of Government Street shortly after the incident, police said.

The suspect in the incident is a 40-year-old Edmonton man, who has been released on conditions and is scheduled to appear in court at a later date.

Police said they are recommending charges of assault with a weapon and mischief against the man.