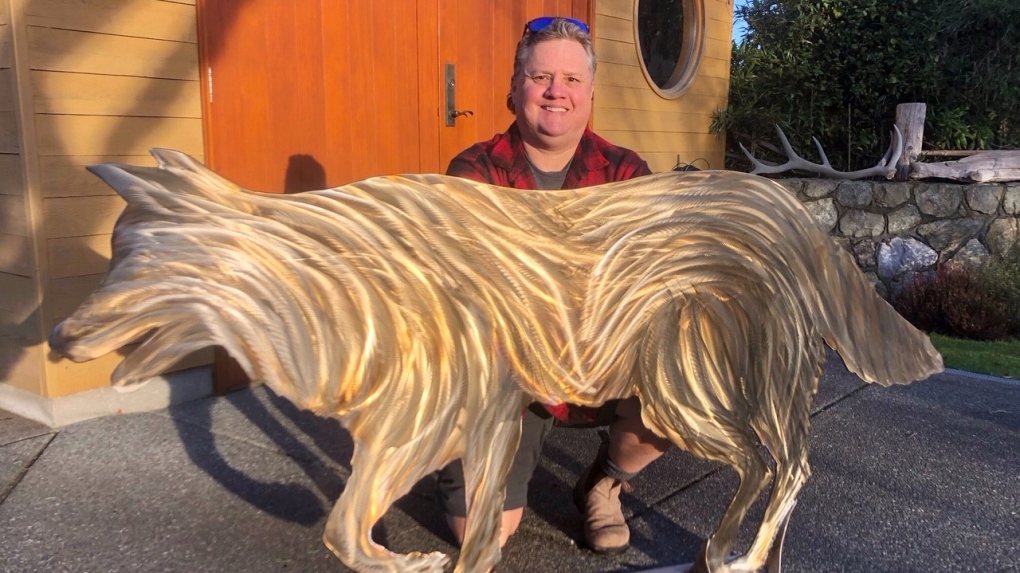 VICTORIA -- It was one year ago that the lone wolf of Discovery Island left for Victoria for reasons unknown.

The famous wolf’s presence in the capital city generated numerous sightings and encounters, prompting police and conservation offices to track and capture the animal.

To commemorate the one-year anniversary of his coming to Victoria, a life-sized stainless steel sculpture of Staqeya was installed on Discovery Island, just off Oak Bay.

Artist Ian Lowe created the piece of art that depicts Staqeya running. The sculpture was placed on the rocks above the shoreline to be visible to boaters passing by.

Cheryl Alexander, a conservation photographer and documentarian, along with local mural artist Paul Archer, made the trek to Discovery Island this past weekend to prep and install the sculpture. 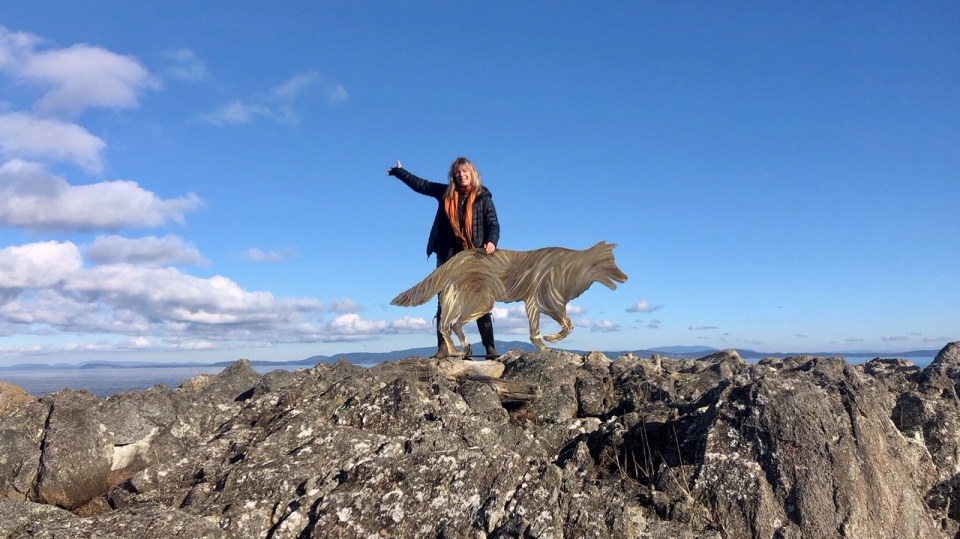 Archer was also there to sign a larger-than-life mural of Staqeya that he painted on the side of a building on the small island in late June 2020.

Alexander said she was moved by how the latest artistic tribute to the beloved wolf’s life looked when they put it in place.

“From a distance, it almost looks like Takaya; like I would have seen him moving along the shore,” said Alexander, who photographed and documented the lone wolf for years.

“It’s going to be a very powerful piece and a reminder of the life that this wolf lived out in these islands that was really pretty incredible.”

Alexander spent the anniversary tracing the animal’s journey through the city, talking with people who encountered the wolf that day and documenting their experiences.

Gilda Good was one of those who spotted Staqeya in the backyard of her Rockland neighbourhood home.

Good says she heard her dog, who she describes as 45 pounds of friendliness, making strange barking noises so she went outside to see.

“My dog was sniffing this other animal, following along the fence - behind what I thought was a great big German shepherd,’ Good said. “The other animal was not paying any attention to her at all. It was quite an extraordinary experience.”

Good said she didn’t realize it was a wolf.

The animal eventually made its way to the back corner of the yard and effortlessly jumped up and onto a two-metre cedar fence, teetered on top for a moment, then leapt to the ground on the other side.

The next day after all the media reports, Good said she was floored to discover it was Staqeya, an encounter she is grateful for.

The experience prompted her to learn more about wolves, something that would have never happened had she not had one in her backyard.

According to Alexander, Good’s experience with Staqeya was one that played out for many others that day, where the wolf showed no interest in other pets or people, and yet, had a profound impact on them - even a year later.

For the conservation photographer, that’s a good thing and she hopes that Staqeya will open people’s eyes to the species as a whole.

“That legacy is that we look at what we are currently doing in our relationship with wild animals, particularity wolves, and that we examine some of the regulatory structures that allow wolves to be killed for no specific reason at all,” she said. “Just for recreational purposes, so I want to change those regulations.”

After two days of sightings, Staqeya was finally tracked, caught and tranquillized in James Bay and released days later in an undisclosed region of Vancouver Island.

Two months later, Staqeya was shot and killed in the Shawnigan Lake area by a hunter, an anniversary that will have its own commemoration later in March.

Alexander doesn’t want Staqeya’s death to be in vain and hopes people will find inspiration from his story during these difficult times.

“He was a wolf that was isolated from his kind for most of his life,” she said. “He managed, he was resilient, he had courage, he was strong, he knew he could make it on his own and I think we should take away some really significant lessons from that as a COVID lesson.”

More information about Staqeya and future events and commemorations are available here.