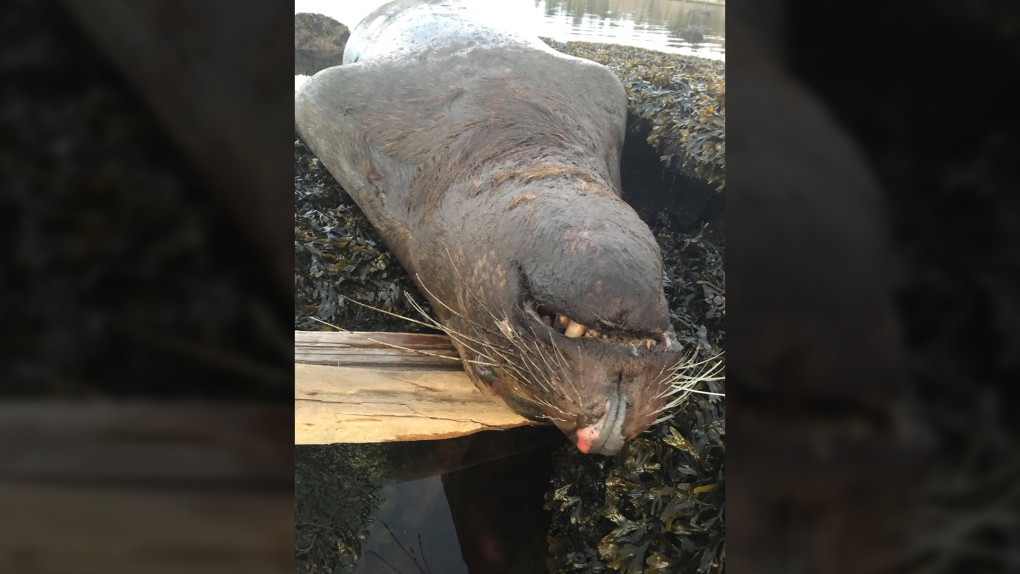 The sea lion was found shot in the head and washed up on Hornby Island Tuesday, March 19, 2019, according to the Sea Shepherd Conservation Society. (Alan Fletcher)

A conservation society in B.C. says a sea lion was found shot in the head as an annual roe herring fishery takes place in the Strait of Georgia.

The dead sea lion was found washed up on Hornby Island on Tuesday, according to the Sea Shepherd Conservation Society.

In a news release, the society said the animal's death "leaves no doubt as to the abuse of pinnipeds our crew has been observing on the water."

It comes after a video posted to Facebook earlier this month showed a commercial fisherman tossing a "bear-banger" explosive in a large gathering of seals and sea lions off the coast of Vancouver Island.

The video sparked public outrage and prompted a stern warning from the Department of Fisheries and Oceans.

The fishermen who posted it defended their actions, saying they were looking for a way to make a living while minimizing the impact seals and sea lions have on their catch.

The issue has stirred debate on whether the government should allow a cull on sea lions that interfere with the herring fishery, something the Pacific Balance Pinniped Society supports.

But Sea Shepherd said it's the fishery that's the problem, as herring stocks have greatly diminished in the Georgia Strait.

"The current swarm of sea lions during the herring spawn is only a barometer that indicates the ecosystem is out of balance, specifically, it has been over-exploited and overfished for too long, with no respite for stocks to recover," the society said.

The group is one of several calling on the DFO to place a total moratorium on the commercial roe herring fishery in the Strait of Georgia.

The DFO confirmed it is aware and investigating reports of the sea lion shot in the head.

The organization reminded all commercial fishermen and the public that under Marine Mammal Regulations, it is illegal to disturb, harm or kill marine mammals like seals or sea lions.

Anyone who witnesses a potential illegal interaction with a sea mammal is asked to report it to their local fishery officer detachment or to the DFO tip line at 1-800-465-4336.

The department said it would provide information on the shot sea lion as it learned more.

The annual herring fishery is scheduled to run to the end of March.