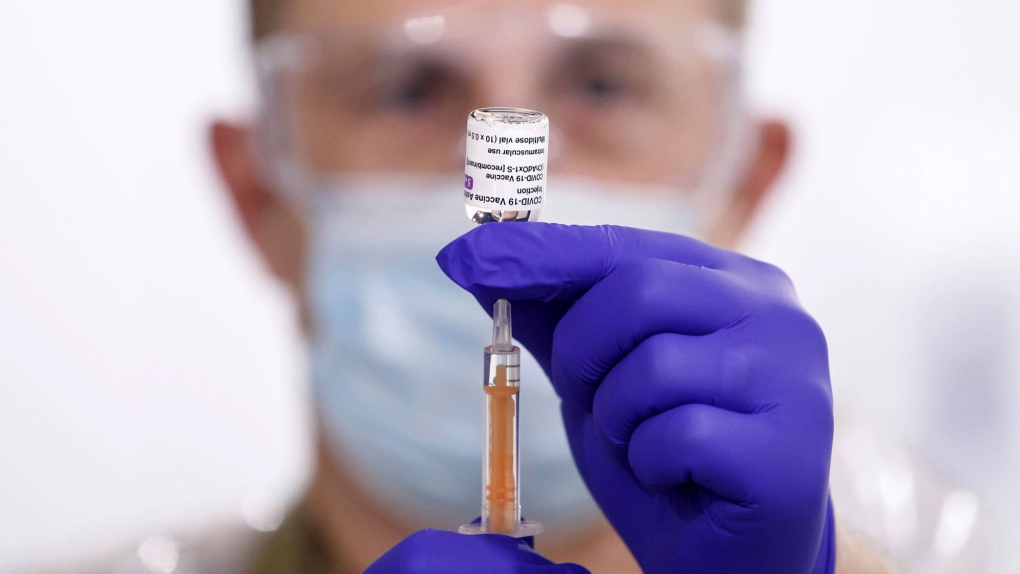 A military medic prepares the Oxford/AstraZeneca coronavirus vaccine ahead of being administered to patients at the Elland Road mass vaccination centre in Leeds, England, Monday Feb. 8, 2021. (Danny Lawson/PA via AP)

VANCOUVER -- Dentists, teachers and bus drivers are among the essential workers who hope to receive the Oxford-AstraZeneca vaccine in British Columbia, as a provincial committee decides who should be prioritized for the shot.

BC Teachers' Federation president Teri Mooring said her members should be included in the plan expected to be released by the B.C. Immunization Committee around March 18.

Education staff have had the second-highest number of COVID-19 claims accepted by WorkSafeBC, behind only health-care workers, and teachers have faced challenging conditions, Mooring said.

“It's been a very difficult and stressful environment for teachers in B.C.,” she said Friday.

“Teachers have not, from the very start, been satisfied with the preventative measures that have been in place in classrooms. What we see is one of the most lax mask policies in all of Canada.”

The province does not require elementary students to wear masks, unlike in Ontario and high-risk areas of Quebec. B.C.'s provincial health officer, Dr. Bonnie Henry, has said young children don't get as sick from COVID-19 or pass it on as well as others.

Henry has said the immunization committee will use public health principles, vaccine science and an ethical framework to reach its decision on which essential workers and first responders should receive the AstraZeneca vaccine.

Once the plan is finalized, the vaccine will be administered in a parallel program to the province's age-based strategy for the Moderna and Pfizer-BioNTech vaccines. The province did not immediately announce plans for the Johnson & Johnson vaccine after Health Canada approved it on Friday.

The BC Dental Association said in a statement it would be “extremely pleased” if its members were included in the group to receive the shot. Dentists and their teams cannot treat patients remotely, work in very close proximity to the mouth and often use aerosol-generating procedures, it said.

The association also pointed out that dentists, dental hygienists and certified dental assistants are included in Henry's recent order to help administer the vaccines.

“We would expect that any dentist choosing to participate in mass vaccination clinics would be required to have been vaccinated themselves prior to providing them,” it said.

Balbir Mann, president of Unifor Local 111, which represents Metro Vancouver bus drivers, said his members should receive the vaccine because they have been at risk throughout the pandemic.

“When people get on the bus to pay their bus fare, they're literally a couple feet away. Our members, day to day, they're scared of the sneezes and coughs they have to deal with on a daily basis.”

Henry has suggested that workers in food processing plants will be prioritized because there have been a number of outbreaks in the facilities that have led to broader community transmission.

James Donaldson, CEO of BC Food and Beverage, said his organization has been advocating for food production workers to receive priority access to vaccines since they became available.

“Our industry is essential as it ensures the continuity of the food supply for people in B.C. and around the world,” he said.

Kim Novak, president of United Food and Commercial Workers Canada Local 1518, represents food plant workers including those at Grand River Foods in Abbotsford who recently grappled with a COVID-19 outbreak.

“It's because of the nature of the work. People are working in close proximity. Even with enhanced (personal protective equipment), staggering breaks and other health and safety protocols that have been implemented, there is still a high level of exposure,” she said.

Novak's union also represents grocery store workers and she hopes they will be included in the plan for the vaccine.

“In grocery stores in particular, there is a lot of exposure to different people in the public,” she said. “That exposure not only is a risk for our members ... but also the public who interact with them.”

BC Trucking Association president Dave Earle, meanwhile, said his group represents both long-haul truckers and local drivers who return home every night. He wants to hear from the province about where the COVID-19 hot spots are in the transportation system.

For example, in B.C., there are 300,000 people with a Class 1 licence allowing them to operate a semi-trailer truck, Earle said.

“Not everybody with a Class 1 licence operates a heavy truck at the moment and many of those who do don't do it in an environment where they're at any greater risk than you and I just going about our daily lives,” he said.

In some European countries, people have been hesitant to receive the AstraZeneca shot because of fears it is less effective than the Pfizer or Moderna vaccine.

Canada's National Advisory Committee on Immunization has also not recommended AstraZeneca for people over 65, while Health Canada has approved it for all adults.

Henry sought on Thursday to assure essential workers that the AstraZeneca vaccine is extremely effective. The clinical trials for all three vaccines were done under different conditions and cannot be fairly compared, she said.

The groups representing essential workers said Friday they hadn't heard any concerns about the AstraZeneca shot from members.

“Whatever you're offered, take it. Let's get out of this.”

This report by The Canadian Press was first published March 5, 2021.