A University of Victoria student project on white supremacy has sparked an emotional debate about free speech.

The project, funded by the UVic Student Society and created by a group called The Third Space, is a large white wall intended for students to write their thoughts on white supremacy.

The wall was erected Wednesday and asked passersby “How do you challenge white supremacy?” It attracted dozens of messages like “Don’t build walls, raise the ground,” and “Black Lives Matter.” 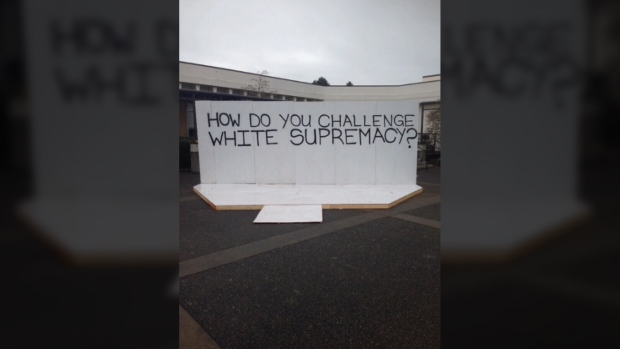 But students arriving on campus Thursday morning noticed large spray-painted words covering much of the wall: “WHITIE GET OUT.”

Some students were visibly upset, including Xanja Free, who covered up part of the message with a blanket.

“I feel like it’s saying that certain people are not welcome here, and that is not fair. Education is a right for everyone, regardless of what you believe or what you think,” she said. “I don’t think these kind of words should be allowed to be on such a huge board for everyone to see. It’s embarrassing for the UVic community.”

“I don’t particularly know what it means,” said Calvin Simpson. “If we’re trying to have a more inclusive campus here I just don’t really get the point of such jarring rhetoric like that.”

The group behind the wall declined to speak with CTV News on camera Thursday, instead issuing a statement.

“The purpose of this art installation is to be an interactive object that generates discussion about the mostly covert and protected framework of white supremacy in the west,” the group said in a statement.

One board director with the UVic Student Society says he thinks some of the messages have crossed the line.

“I’m not personally about to go do anything about it, but you can clearly tell by all the students out here talking that this is definitely something that should be brought back to the table,” said Jordan Quitzau.

Other students think the message may have been left by a person who intended to sabotage the project.

“That, I’m pretty sure was someone who isn’t a person of colour,” said Kevin Henry. “I’m pretty sure it was done to delegitimize students of colour here, because before it was just a simple message, but now it’s been defaced.”

Administration at UVic is allowing the wall to stand for now, but said it does not tolerate harassment and discrimination.

By mid-afternoon, the message had been painted over, but The Third Space said it wasn’t because of complaint but rather because the board was getting too full.