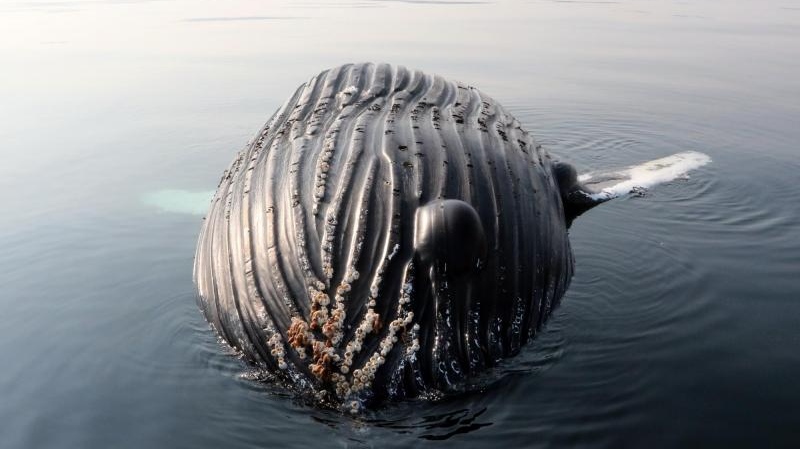 Researchers believe this whale died as a result of a collision with a ship in the Juan de Fuca Strait, based off of a necropsy of its body: (Ian Flynn-Thomas / Cascadia Research)

VICTORIA -- A humpback whale that was found dead in the Strait of Juan de Fuca last week likely died after colliding with a ship, researchers say.

According to the Cascadia Research Collective, the whale – which was identified as Hawkeye, a young male first spotted in 2016 – showed signs blunt force trauma to the head during a necropsy.

Researchers say it is not entirely certain that the whale died from blunt force trauma, as the body was found in an “advanced state of decomposition,” but the injury is the most likely theory.

“It was determined that the whale had been in reasonable health prior to death and showed evidence of pre-mortem blunt force trauma to the head,” said the research collective in a release Monday.

Shortly after the whale carcass was discovered by a Victoria whale watching company, it was theorized that it had died from a collision with a vessel.

“Since the whale was found next to busy shipping lanes, there is concern among the professional naturalist community that the whale was struck by a passing ship,” said the Pacific Whale Watching Association on Sept. 30.

The Washington state-based Cascadia Research Collective said Monday that a dramatic increase in marine traffic in the area “has made ship strikes of whales a growing concern on both sides of the border.”

On Sept. 30, the Pacific Whale Watching Association said that if the humpback died as a result of a collision with a vessel, it would mark the fourth such death in the region over the past two years.

Warning: A graphic image of the whale’s remains is pictured below.