Day 1 of separated bike lanes cause for excitement, anguish in Victoria

While Victoria cyclists celebrated the opening day of the city’s first protected bike lanes, some drivers were left honking mad by changes to traffic patterns.

The long-awaited $3.4-million bike lanes along Pandora Avenue from Cook to Store streets were opened to riders Monday, and with them came new traffic signals for cyclists and new rules for drivers.

The biggest change is that motorists on Pandora can no longer turn right on a red light, and must now wait for a right-turn light before crossing over the separated bike lanes.

“I mean, you have a turning lane but you’re not allowed to turn. What the hell? It’s stupid,” one frustrated driver told CTV News before speeding off.

But the frustration was felt on both sides of the barrier, with one cyclist saying she saw four drivers turn right on a red light in the span of about 10 minutes – and she was hit by one of them.

“It’s a new learning curve. I don’t know if they don’t see that sign or if they don’t want to turn anyways,” said Janet Bessler. “The problem is the light’s green for me and I proceeded halfway through the intersection and then all of a sudden I’m bumped by a car, so I suggest that cyclists watch until the drivers get it.”

Other cyclists said they anticipated the new lanes would be a big time-saver that will better connect the city’s main cycling routes.

“With time, I think people will get used to it. It’s just being reasonable and sharing the road with other cyclists and pedestrians too ” one commuter said. “Once the blue bridge, and the connections are made to the [Galloping] Goose, that’s going to be great for tourism and for people coming to visit the city and bike around.”

The rules also proved confusing for the driver of a City of Victoria vehicle, with CTV cameras catching it turning right from Pandora onto Government Street, across the new lanes, on a red light. 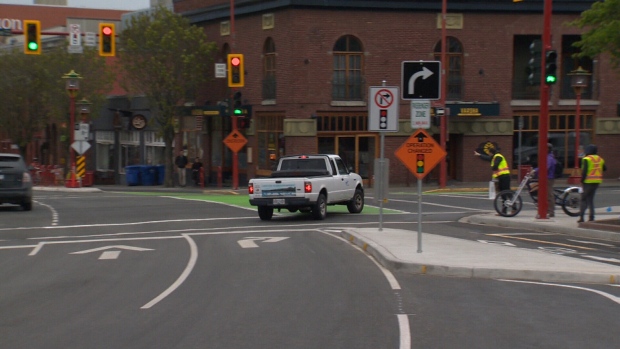 The city says it expects it will take some time for everyone to acclimate to the changes, and staff are running an education campaign at various intersections along Pandora to call attention to the new rules. They’ll remain on street corners until the end of the week.

Victoria Mayor Lisa Helps, who has long championed the separated bike lanes, fired back at a tweet mentioning driver complaints over the “confusing” new rules.

“When roads were paved, traffic lights went up and cars hit the streets in the early 20th century, people were equally upset,” she replied. “New is hard.”

The city has put together a page on its website to educate drivers and cyclists about all the changes to Pandora Street traffic.

The Pandora Street bike lanes are just one part of the city’s ambitious Biketoria plan. The next street to undergo a cyclist-friendly transformation will be Fort Street, with construction slated to begin this fall.

An official opening event for the Pandora bike lanes is planned for May 14.

With a report from CTV Vancouver Island's Scott Cunningham