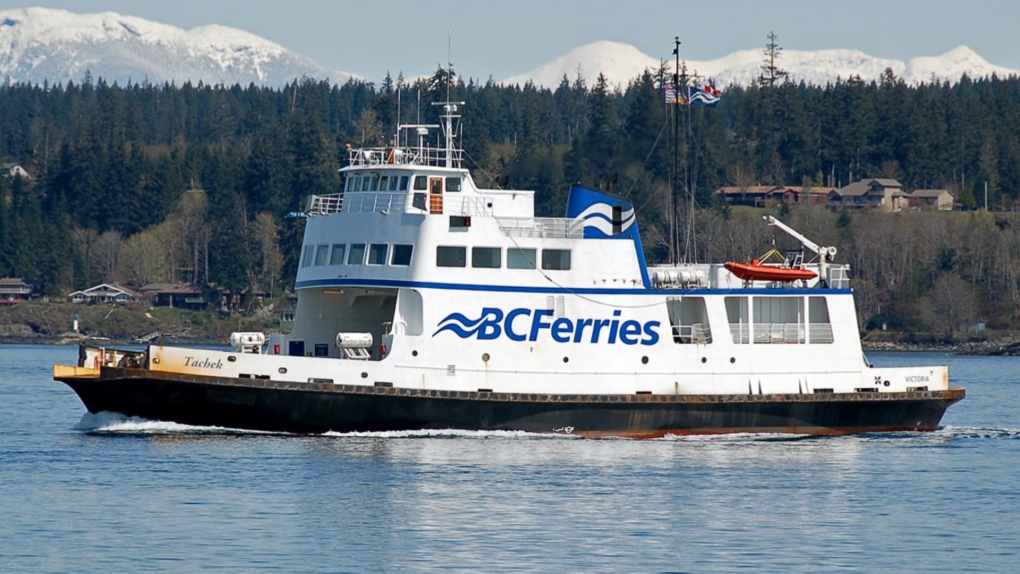 The route between Quadra and Cortes islands is served by the vessel Tachek, which was built in 1969 and has a capacity of 150 passengers and crew, as well as 26 cars. (BC Ferries)

All ferry sailings between two of B.C.'s Discovery Islands have been cancelled Saturday because of a lack of crew.

BC Ferries announced the cancellations on the route between Heriot Bay on Quadra Island and Whaletown on Cortes Island in a statement Saturday morning. Initially, the company said six sailings had been cancelled, but by 10 a.m., all 12 of the sailings on the route Saturday were affected.

"We require a specific number of crew members on board the vessel to ensure the safety of our passengers in the unlikely event of an emergency and to comply with Transport Canada regulations," BC Ferries said in the statement.

"The decision to cancel a sailing in these circumstances is made when we have exhausted all options to find replacement crew."

The route between Quadra and Cortes islands is served by the vessel Tachek, which was built in 1969 and has a capacity of 150 passengers and crew, as well as 26 cars.

It's the only BC Ferries route serving Cortes Island.

"We appreciate your patience and apologize for any inconvenience you may experience as a result of these cancellations," the company said.

BC Ferries has been struggling with staff shortages for months, even as it works to hire more people and welcomes back employees who were placed on leave without pay because of the federal COVID-19 vaccine mandate for transportation workers.

The company said this week that it has hired approximately 850 workers since the start of the year. About 150 people were placed on leave because of the vaccine mandate.

"We are still struggling to find licensed experienced officers," BC Ferries president and CEO Mark Collins said late last month, noting the shortage of experienced mariners is a worldwide issue and has been for years.

RCMP's use of spyware tools under scrutiny at parliamentary committee

Canada's privacy commissioner says the belated disclosure that RCMP has for years been using spyware capable of accessing cell phone and computer microphones, cameras and other data as part of major investigations, is a clear example of why Canada's Privacy Act needs updating.

Saskatoon woman who had been reported missing facing charges in U.S., Canada

Saskatoon police say a woman who had been reported missing is facing charges in the United States related to unauthorized use of identification and in Canada related to parental abduction and public mischief.

EXPLAINED | What is a 'zombie fire?' Experts describe the cause and concerns

Authorities in the Northwest Territories are monitoring a large 'zombie fire' that flared back up following last wildfire season after smouldering underground during the winter months.

No damage reported after 4.6 magnitude earthquake off Vancouver Island

A 4.6 magnitude earthquake has struck off the coast of Vancouver Island.

Housing correction in Toronto could end up becoming 'one of the deepest of the past half a century,' RBC warns

A housing correction which has already led to four consecutive months of price declines in the previously overheated Greater Toronto Area market could end up becoming 'one of the deepest of the past half a century,' a new report from RBC warns.

The white father and son convicted of murder in Ahmaud Arbery's fatal shooting after they chased the 25-year-old Black man through a Georgia neighbourhood were sentenced Monday to life in prison for committing a federal hate crime.

For millennial and gen Z Canadians, owning a home in this real estate market might seem like a pipe dream. In an exclusive column for CTVNews,ca personal finance contributor Christopher Liew offers some strategies to consider if you can’t afford the housing market yet.