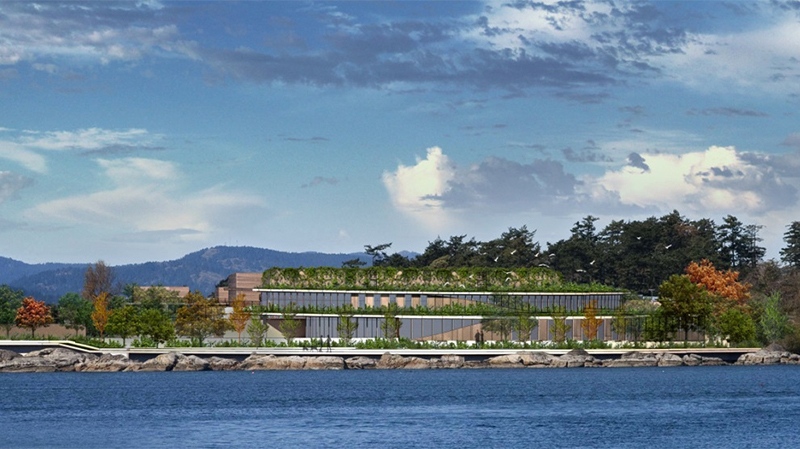 A redesigned rendering of a sewage plant recommended to be built at Esquimalt's McLoughlin Point has a smaller footprint, is set back from the shore, and includes more green space. Sept. 7, 2016. (CRD)

The Capital Regional District's sewage treatment plan is now forecast to run up to $30 million over its $765-million budget, depending how the project's board proceeds next.

If the project's scope is refined, as suggested in one of two reports going to the independent project management board Friday, CRD approval will be sought for a $10-million budget increase. Otherwise an additional $30 million will be sought.

Project officials are blaming Vancouver Island's heated construction market for the increase, saying they've seen cost pressures on all seven of the conveyance contracts to date. The rising price of materials and labour are both factors in the increase, they said.

Two project directors recommend refining the scope of the project by scrapping three components of a conveyance system that a 2004 plan initially thought necessary.

The system is designed to move excess wet weather flows to Clover Point, where they can be discharged through a long outfall instead of shorter overflows in Oak Bay.

Through "significant changes" influencing the need for some of the components, like reductions in water use and the collection of flow data, KWL finds there's no benefit to three of the remaining project components. It says only one is needed to meet regulations.