VICTORIA -- Colwood Mayor Rob Martin says the Capital Regional District is considering conducting a full feasibility study into the creation of a commuter ferry between Royal Bay and downtown Victoria.

The mayor says that the CRD transportation committee voted to advance the feasibility study at a meeting Wednesday.

That recommendation will then be presented to the CRD board at a meeting on May 12. If it is also supported by the board, the CRD would then work with the province and other stakeholders on conducting the feasibility study, according to Colwood.

"In a region surrounded by water, it would be irresponsible not to fully explore the feasibility of marine travel as one approach to addressing traffic congestion and achieving our active transportation and clean energy goals," said Martin in a release Wednesday.

In 2019, BC Ferries received its first analysis on what a commuter ferry between the West Shore and downtown Victoria would entail.

The "Pre-Feasibility Study," which was commissioned by BC Ferries in 2018, presented three potential ferry terminals, one in Royal Bay, one in Esquimalt and one in Ship Point, downtown Victoria.

The study estimated that the entire project would cost approximately $41.6 million, with fare prices costing roughly $5.75 per passenger. 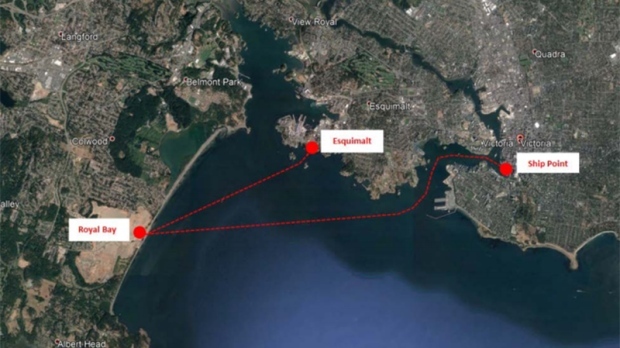 The proposed ferry terminals included in the 2019 pre-feasibility study into the commuter ferry are shown.