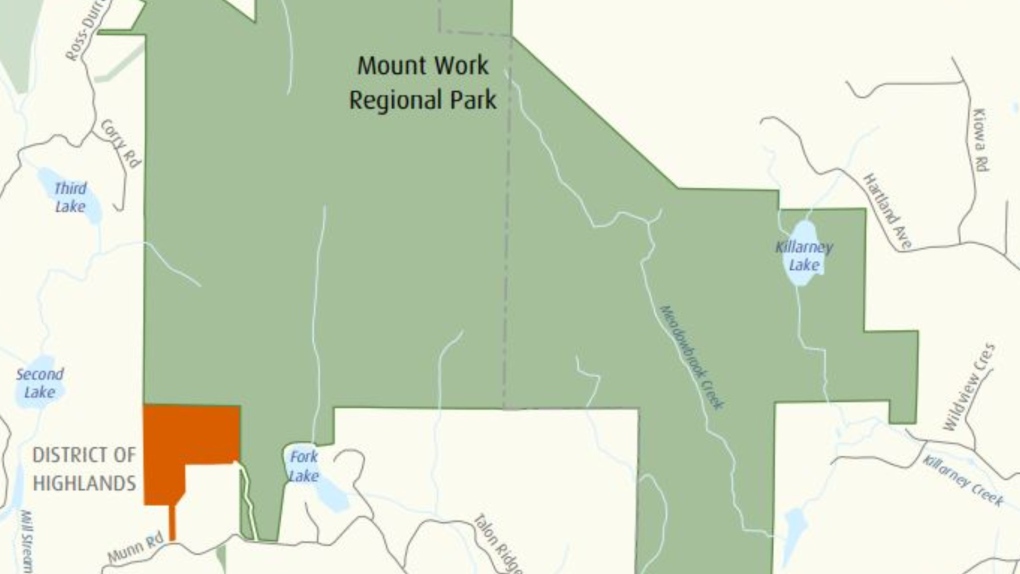 The CRD announced the acquisition of the new land (highlighted in orange) for Mount Work Regional Park on Monday, May 17, 2021.

VICTORIA -- A regional park in Greater Victoria that’s popular with hikers and mountain bikers is slated to grow by just under 14 hectares.

The Capital Regional District announced Monday it has acquired two parcels of land that it will add to Mount Work Regional Park.

The 13.8 hectares of land is mainly second-growth Douglas fir forest with a mix of arbutus, oak and dense vegetation, according to the CRD.

The land previously belonged to Waultraut Schnarr, who decided to part with it in memory of Schnarr’s husband, according to a statement Monday.

“My family has owned and cherished the property for 41 years,” said Schnarr. “Although it has been difficult to let go of these lands, from an environmental perspective we can think of no better use of the land than to have it revert to park to maintain the beauty of the natural landscape forevermore.”

With a previous acquisition of just over 12 hectares in December, the CRD has added almost 26 hectares of forest lands to Mount Work park in recent months.

Plans for the new land will be finalized during the ongoing Mount Work management planning process.

The CRD has acquired over 4,800 hectares of land through its Land Acquisition Fund since it was established in 2000.