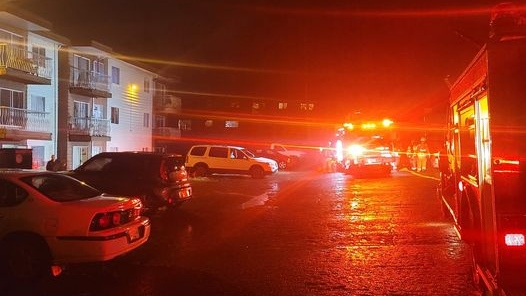 A Port Hardy, B.C., man is being credited on social media with helping extinguish a fire inside an apartment complex on Highland Drive early Tuesday morning.

Adam Nelson believes alarms in the Old Horizon apartment complex started sounding around 3 a.m. as he was in his room with his girlfriend. He initially believed somebody was messing with the alarm system.

"Next thing I know I hear somebody banging at our door and trying to open the door and banging like crazy, so we both got up and ran to the door," he told CTV News.

"One of our neighbours downstairs said there was an actual fire," Nelson said.

"She ran towards the fire hose in the hallway so I ran out there with her to go get it and get it set up."

The pair extended the hose to the stairwell where Nelson encountered thick smoke.

"By the time I got inside the stairwell on the third floor the whole upstairs of the fourth floor stairwell was full of black smoke and I’d seen a bit of the flame," he said. "I tried to get the water towards the fire."

The effort proved difficult because the hose was kinked, but the two straightened it out before he went to see if anyone was trapped in the stairwell.

"I crawled on my hands and knees to see if anyone was there," he said. "I felt around, I didn’t feel anything and I went back downstairs."

"Once I got the fire out all the smoke started moving everywhere and I got soaked and ended up running out of there," he said.

Nelson says he doesn’t believe anyone was injured in the blaze but he’ll be heading to a medical clinic today to see if he suffered any effects from the smoke.

He believes one or two people may have been temporarily relocated because of smoke damage.

CTV News has reached out to the Port Hardy Fire Department for details.

This is a developing story, check back for updates.