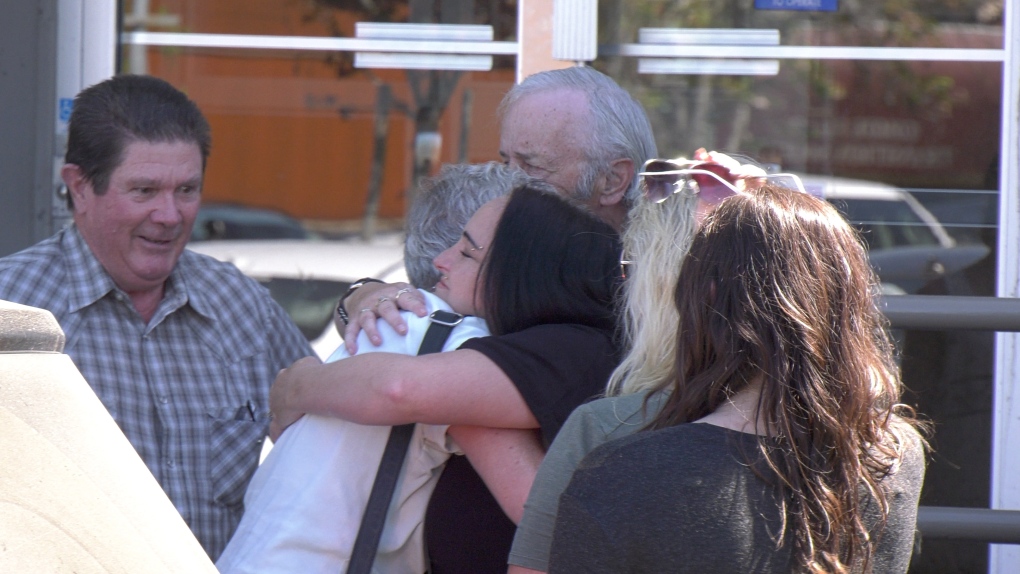 The families of Leanne Larocque and Gordon Turner embrace outside a Courtenay courtroom after the pair's killer was sentenced to life in both cases. May 9, 2019. (CTV Vancouver Island)

A B.C. Supreme Court judge handed down his sentence Thursday for a 45-year-old man convicted of murdering his ex-girlfriend and her close male companion on Oct. 5, 2016.

During his sentencing, the judge referred to the crime as an "unspeakable tragedy" and noted there was no sentence he could impose that would help repair the terrible damage that was done to the victims' families.

Justice Thompson agreed with the Crown's assertion that the murders amounted to "executions" and that the two were killed in a "jealous fury."

The court had earlier been told that Simard and Larocque had an on-again, off-again relationship and despite restrictions against consuming alcohol, possessing firearms or coming near Larocque, Simard entered her Urquhart Avenue home.

Simard fired four shots into the front door of the home at 3 a.m. on the Oct. 5, 2016 and shot Turner in the chest with an assault rifle before then proceeding to Larocque's bedroom and shooting her in the head.

Simard then went back into the living room to shoot Turner a second time before turning the gun on himself in a failed suicide attempt.

Upon leaving the courtroom a female voice could be heard saying "rot in hell Mikey."

Outside, family and friends of the two victims had mixed reactions to the sentence, with Turner's mother Ruth believing it was as good as they were going to get.

Leanne's father Ron Kelly thought the sentence was good but feels Canada's law needs to change so that people like Simard must face consecutive sentences.

"To be nailed for one murder, per se, and be charged with one instead of two, I don't agree with that," Kelly said.

In addition to his sentence, Simard will also have to provide a DNA sample to a national registry and will have a firearms prohibition for life.