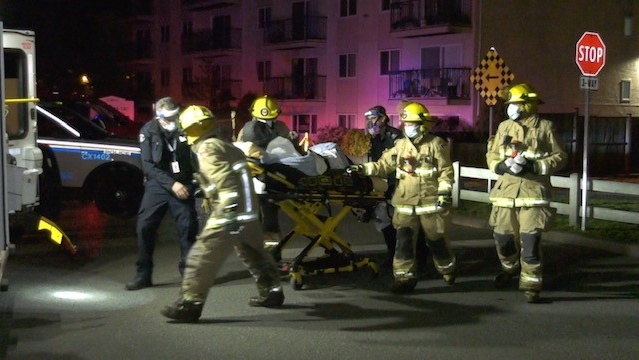 The call came in shortly before 3:30 a.m. in a wooded area near the city’s public works yard. (CTV News)

COURTENAY -- Firefighters, RCMP and paramedics responded to a disturbing call Tuesday morning along a trail near 10th Street in Courtenay and found a badly burned man.

"It looks like somebody had a small fire and maybe had gone to sleep and lit their clothes on fire," says Courtenay fire Chief Don Bardonnex.

The call came in shortly before 3:30 a.m. in a wooded area near the city’s public works yard. The area is located a few blocks from a supportive housing complex called The Junction run by BC Housing.

Bardonnex says the male was still on fire and was suffering from serious burns.

"We extinguished the fire, cooled the patient and then got him up onto BC Ambulance's stretcher and away he went," he says.

The patient was rushed to hospital but there is no update on his status.

"The man was able to tell police that he lit the fire to stay warm when his pants caught on fire," she said.