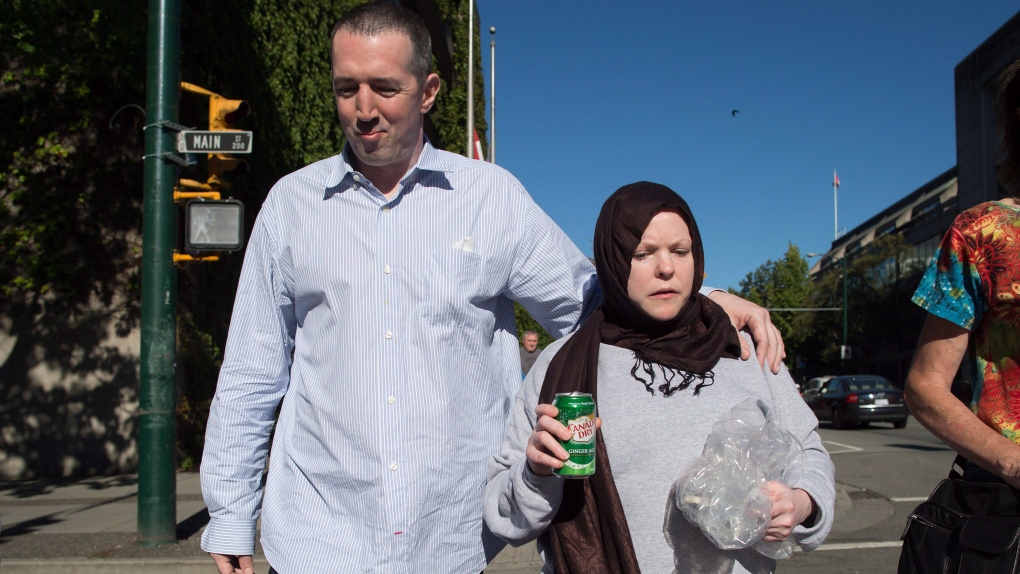 John Nuttall, left, and Amanda Korody leave jail after being re-arrested and placed under a peace bond and released again, after a judge ruled the couple were entrapped by the RCMP in a police-manufactured crime. July 29, 2016. (The Canadian Press/Darryl Dyck

A couple who were cleared on terrorism charges after being accused of plotting to blow up the B.C. legislature buildings are suing the RCMP along with the provincial and federal governments.

John Nuttall and Amanda Korody were arrested on Canada Day in 2013 after they planted what they thought were pressure-cooker bombs on legislature grounds.

The arrests were the culmination of a lengthy undercover RCMP investigation into the couple, who had recently converted to Islam.

While Nuttall and Korody were found guilty of several terrorism-related charges in June 2015, the pair were cleared of the convictions in 2016 after B.C.’s highest court ruled that the pair had been entrapped by RCMP.

The Court of Appeal found police manipulated the pair and used deceit and veiled threats to engineer the bomb plot.

Nearly a decade after the pair were arrested, Nuttall and Korody have filed a civil lawsuit against several officers involved in the investigation, as well as the prosecutors in their case and the B.C. and federal governments.

The suit says the pair are suing for charter, general, special, and punitive damages – as well as legal costs and interest.

The suit claims Nuttall and Amanda suffered "serious harm" during the investigation, trial, and years after their arrest, including imprisonment, emotional distress, psychiatric injuries and damage to their reputations.