A cougar spotted prowling through an urban Victoria neighbourhood led police and reporters on a wild chase Monday morning.

Reports of the big cat, estimated to be 85 pounds, started streaming in Sunday night, prompting an area-wide search by conservation officers and Victoria Police Monday.

A throng of media reporters were also searching high and low for the animal.

It’s the first time since 1998 conservation officers have tranquilized and relocated an animal from Victoria.

“We don’t get that many sightings around here. We get a lot of sightings out in Sooke and Metchosin, the Highlands, places like that where you expect them,” said BC Conservation Officer Peter Pauwels.

CFAX 1070 reporter Kyle Reynolds said that at one point, the cougar leaped over the heads of officers and darted past media.

Officers discovered the cougar behind a Michigan Street apartment building, just blocks away from the B.C. Legislature, and successfully shot it with a tranquilizer dart, but the cougar took off running again.

They caught up to it again, and once it was sleeping, loaded it into a conservation officer’s truck.

“I’m gonna try to take it as far away from human civilization as I can get on southern Vancouver Island,” Pauwels said.

He later confirmed the cougar was released in a heavily wooded area between Shawnigan Lake and Port Renfrew.

The cat was also fitted with an ear tag so conservation officers can track its movements.

It is unclear whether it’s the same cougar witnessed by several people in Oak Bay on Friday.

A devoured deer carcass found in Oak Bay is also believed to have been the work of that same cougar. 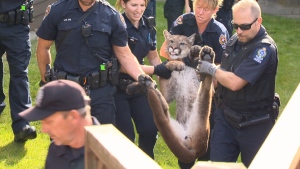