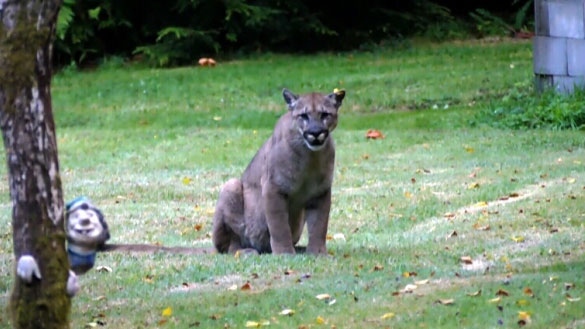 A Vancouver Island man is sharing chilling footage of a cougar that stared him down for nearly 45 minutes – in his own backyard.

Larry McCafferty posted a video to YouTube Sunday showing the big cat eyeing him up on his property in Shirley, B.C., near Sooke, saying he had “no doubt” the animal was considering him as an “early evening snack.”

“As soon as I went out the door he was sitting there looking at me…and I had time to go back in and grab the camera,” McCafferty wrote on YouTube.

The cougar, sporting a yellow tag on its left ear, is first seen sitting on its back legs with its mouth open, intently staring at McCafferty through his camera.

It eventually lies down, getting comfortable on the grass while occasionally glancing over at the videographer.

At one point the cat gets up and takes a big stretch before peeking around a tree at McCafferty, around which time the battery in his camera goes dead. 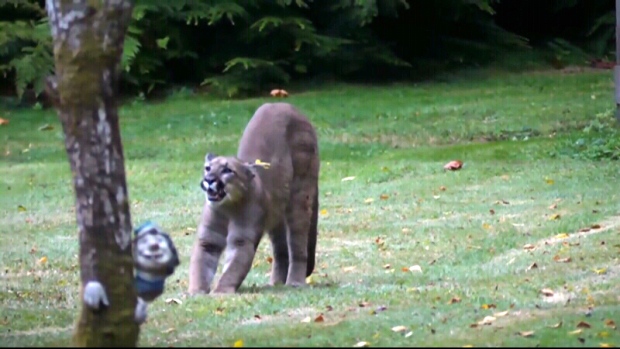 “When it came around the tree it took a couple of steps in my direction and then turned and put the front paws up on the cherry tree and had a look around up there, then came down and took another step or two in my direction…at which point I stepped back into my door,” he said.

But the BC Conservation Officer Service has a different explanation for why the cougar lounged around for so long – it was just being a cat.

“Cougars behave the same way that housecats do, so when you look at your housecat lying around and being curious, it’s not thinking about eating you,” said Sgt. Ben York. “This animal is just hanging in a backyard because nothing bad is happening to it.”

Furthermore, a cougar on the hunt for food wouldn’t put itself directly in the sightline of its prey, York said.

“When a cougar is aggressive, its ears are back and its hunkered down low,” he said.

The presence of a tag on the cat’s left ear indicates it was relocated, and is possibly the animal that got loose in James Bay last year before it was tranquilized and moved to outside of Port Renfrew.

It could also be the cougar that was spotted on Piers Island two years ago, causing concern for residents.

“Cougars can move a long distance,” he said. “They can get habituated to human presence and get a level of comfort. It’s possible that this animal is comfortable in that kind of rural environment.”

Cougars are only destroyed if they show genuine threatening behaviour, York said.

He added the cat in the video doesn’t appear to pose any greater threat – and wasn’t reported by the man filming it.

Anyone who spots a wild animal like a cougar in a residential area is urged to report the sighting to the CO hotline at 1-877-952-7277 for tracking purposes.