CTV Vancouver Island’s approach to serving the island is directly inspired by its local viewers, advertisers and the communities it serves. Innovation, enthusiasm, and Vancouver Island pride are evident in every local news story and community partnership the station undertakes.

From our three key locations, the street-front Victoria broadcast headquarters, the mid-island bureau in Nanaimo, and the North Island bureau in the Comox Valley, CTV blankets the island covering the news and reporting the stories that matter most to our viewers. The news team broadcasts seven days a week: ‘CTV News at 5', a fast-paced magazine-style show that delivers the most popular news, current local affairs, and regular segments airs weekdays, followed by "CTV News at 6', the station's flagship newscast, anchored by Andrew Johnson. We round out each weekday with ‘CTV News at 11’ following up on the day’s top stories and preparing you for tomorrow. Weekend coverage happens with the half hour broadcast of ‘CTV News at 6’ on Saturday and Sunday.

An award-winning organization, CTV Vancouver Island has been recognized both for its exceptional news-reporting and outstanding creative production. CTV News has been honoured with more than 50 broadcast industry awards for excellence since 2004, including the 2018 RTDNA National Award for Best Newscast. CTV Vancouver Island’s Creative department has received 23 industry awards for its work on local commercials and advertising campaigns.

The station’s excellence, however, goes far beyond local news and advertising. CTV has been, and continues to be, one of the leading supporters of the arts and sports communities, educational and health-awareness initiatives, family events, and charitable organizations on Vancouver Island. 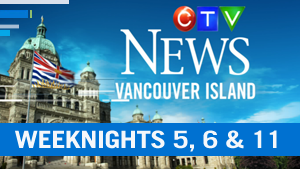