Beckett’s family and friends were surrounded by hundreds of first responders and uniformed Mounties, who marched in a processional prior to the service at the Q Centre.

“We are here today to sorrow over our loss, but we are also here to celebrate a life that mattered. A life that made a difference,” Chaplain Jim Turner told the crowd.

“A life that was focused on family; the joys of being a mom. We’re also here to celebrate a life that was dedicated to service; for the community, country, and her fellow man.”

Beckett’s godfather Jack Hayden shared stories from her life, painting a picture of a funny, loyal and loving mother, wife and friend.

He also read an emotional message to Beckett from her husband, Brad.

“My dear Sarah. My heart, my rock, my soulmate. No words can begin to describe the loss we are experiencing at this time. You warned me this day may come when we first met each other, but I was not prepared for it,” Brad wrote.

“I want you to know that even if I would’ve known that this was going to happen when we first met, I would still take this journey 1,000 times over with you.”

“I love you. I miss you. And I will never forget you. I promise your memory will never fade because you will always live on through our boys.”

Beckett, an 11-year member of the force, died after her cruiser was struck by a pickup truck in Langford on April 5. She had recently returned back to work from maternity leave.

BC Ferries offered free ferry rides for all first responders to help them travel to the funeral, and Saanich Police showed their support by offering to staff the West Shore during the service so Mounties there can attend.

With candles in hand, an estimated 3,000 people walked to Veteran’s Memorial Park from the intersection where she died last Tuesday.

Those whose lives were touched by Beckett spoke to the massive crowd, sharing personal stories about the 32-year-old Mountie.

“With every smile you give, with every embrace you share, with every syllable of support that you utter to one of us, it means more to us than you could possibly imagine,” said West Shore RCMP’s Cpl. Scott Hilderley. “Because it helps us to lift ourselves, and otherwise we’d be struggling to do so.”

Hilderley remembered the first time he met Beckett, then a high school student enrolled in a police camp training academy.

“From the first time I went nose-to-nose with Sarah and barked orders at her, I didn’t see intimidation in her eyes, I didn’t see fear, she didn’t shrink from any challenge I gave her. Instead I saw motivation, I saw determination, I saw courage,” he recalled. “On graduation day she came up to me beaming with pride and said ‘I know what I want to do with my life now: this.’”

Vigil organizer Ryan Carveth, who didn’t know Beckett but said he felt compelled to act following her death, credited the community for bringing the event together.

“I really hope her two young ones and her husband can look back and see the town that stood behind her,” he said. “See how proud we all are of her service, for everybody that does something for us.”

The campaign shattered its goal of $5,000 and has raised more than $80,000 since it was established last week. The campaign will continue until Monday, April 18. 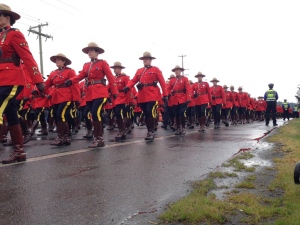