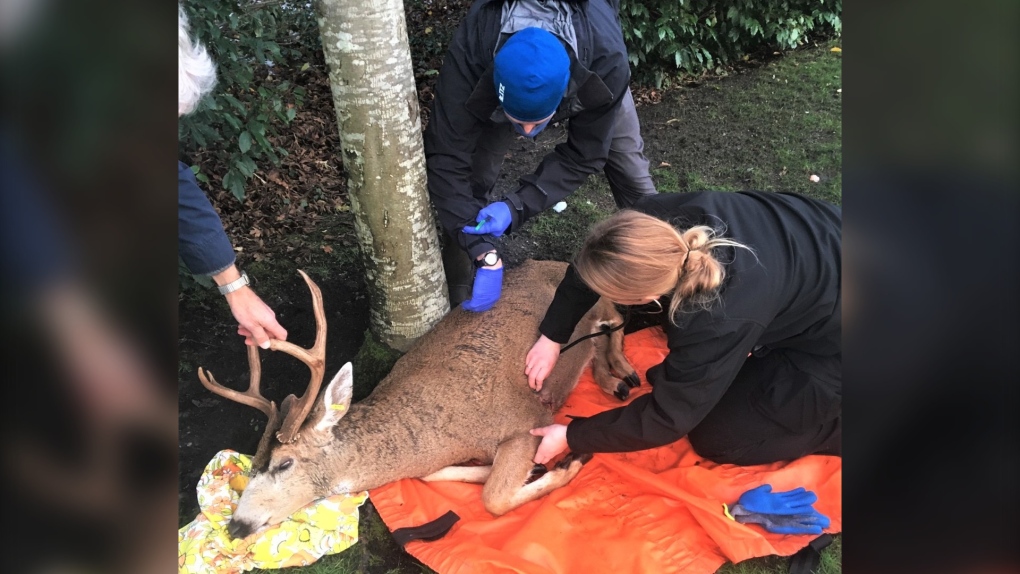 VICTORIA -- Conservation officers are seeking information after a deer was discovered shot by an arrow in the Oak Bay area earlier this week.

The BC Conservation Officer Service (BCCOS) first began receiving reports of the injured deer on Dec. 17, according to BCCOS Sgt. Scott Norris.

After multiple reported sightings, one BCCOS officer went door-to-door in the Oak Bay community looking for further details on Wednesday.

“Luckily, one of the doors she knocked on was a retired wildlife biologist,” said Norris.

BCCOS officers and the retired biologist then tracked down the animal later that day.

With the help of a local veterinarian, the team sedated the injured buck and removed the arrow from its side.

“The deer walked away soon after,” said the conservation service in a social media post.

The BCCOS is now looking for any information related to the incident. Norris says that hunting is illegal within 100 metres of a home, park or other public building such as a school under the BC Wildlife Act. Additionally, many municipal bylaws prohibit the firing of weapons within city limits.

“Given it happened in that area, I can’t imagine a deer stumbled in from an area where hunting (is permitted),” said Norris.

The conservation officer added that hunting season officially closed on Dec. 10, so it is likely that this deer was shot after hunting season had ended for the year.

“This is something we want to follow up with,” said Norris.

Anyone with information on the incident is asked to call the Report All Poachers and Polluters hotline (RAPP) at 1-877-952-7277.

The conservation service says it is grateful for the reported sightings it received from the community and for the help of the retired wildlife biologist and veterinarian.

“It all worked out, thankfully,” said Norris. “Like I said, it was a little bit of luck and thanks to the public and the vet and the retired gentleman for spending their time.”

The deer is expected to recover.