VICTORIA -- On Monday, in screaming winds and high seas, a military rescue squadron out of Comox boarded a helicopter to save an ailing sailor north of Vancouver Island — and once their mission was complete, the call of duty came again.

As winds began to build and seas grew off the coast of Haida Gwaii, a call squawked over the emergency radio. A sailor aboard a massive container ship needed an immediate medical evacuation.

As in most cases like this in B.C. waters, a specialized rescue team at the Canadian Forces Bases in Comox was deployed, as they are the only ones with the training and equipment to venture that far off the coast.

In most cases when the calls come in, despite the weather, they go.

“The weather was poor with 300 foot ceilings, less than a mile visibility and four to five metre seas with 55-70 kph winds,” said Captain John McSheffrey, the aircrew commander of the CH-149 Cormorant helicopter.

Video taken by the squads flight surgeon, Kaighley Brett, shows the helicopter approach the bulk carrier ship. The vessel is roughly the length of a city block and the height of a small apartment building. 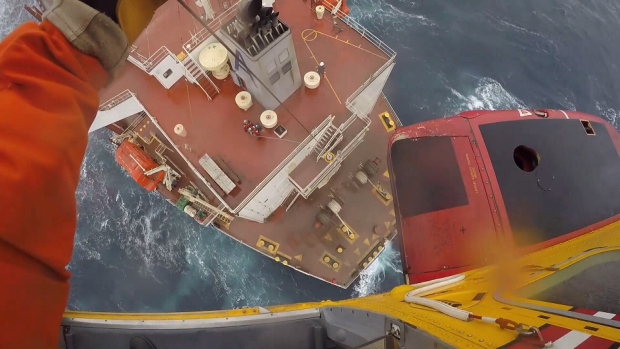 The crew watched as waves broke over the vessel's bow.

Hovering over the vessel's stern, a rescue crew member locked into a winch and lowered themselves down while the pilot steadied the chopper in blasting wind. Securing the ailing crew member on the boat's deck, the winch then returned to life and pulled the pair through wind, rotor wash and splashing seas to safety.

“The conditions were challenging,” remarked Captain McSheffrey . “And we could see the waves breaking over the front of the vessel.”

Just as the Comox-based crew dropped off their patient in Queen Charlotte City for care, the radio squealed again. There was a call for another rescue, and conditions were not improving.

Late Monday, the team resupplied, refueled and headed out again. Their destination was another bulk carrier ship off Cape Scott near Vancouver Island's northern tip. Joined by a CC-115 Buffalo aircraft, the rescue squadron zeroed in on a vessel with another injured crew member.

Testing their mettle in harsh conditions, the crew located the boat on Tuesday morning and hoisted the sailor to safety.

The patient was then taken to Courtenay for further medical treatment.