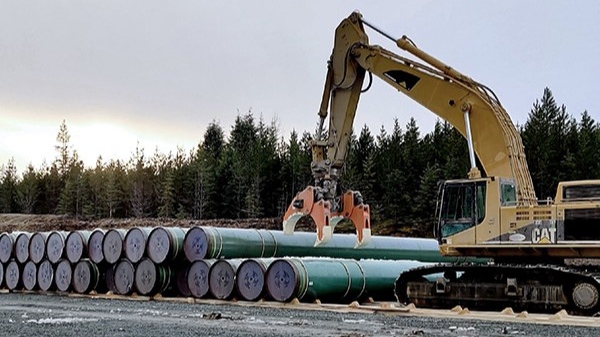 The 670-kilometre natural gas pipeline is being built as part of a $40 billion liquefied natural gas project in northern British Columbia. (CTV News)

SMITHERS, B.C. -- A company building a natural gas pipeline though northwestern British Columbia says it could delay work in an area at the centre of a dispute with a First Nation, but it is ready to resume construction.

The hereditary chiefs of the Wet'suwet'en First Nation issued an eviction notice to Coastal GasLink on the weekend, but the company said today it is willing to “discuss issues of importance” to the chiefs.

The company says it is resuming work generally across the pipeline right-of-way, but it believes “dialogue is preferable to confrontation” and will delay workers returning to the area that's under dispute while a negotiated resolution remains possible.

The 670-kilometre natural gas pipeline is being built as part of a $40 billion liquefied natural gas project in northern British Columbia.

Work on the $6.2-billion pipeline between the Dawson Creek area and LNG Canada's export terminal in Kitimat was stopped over the holidays but the company says construction activities, including delivery of pipeline materials, are scheduled to resume this week.

Wet'suwet'en hereditary chiefs issued a letter Saturday advising the company that its staff and contractors are “trespassing” in the same area where 14 protesters were arrested last January when the RCMP enforced an interim injunction at a blockade near Smithers.

The company has signed agreements with all 20 elected First Nation councils along the pipeline path, but five hereditary chiefs of the Wet'suwet'en say the project has no authority without their consent.

This report by The Canadian press was first published Jan. 7, 2020.