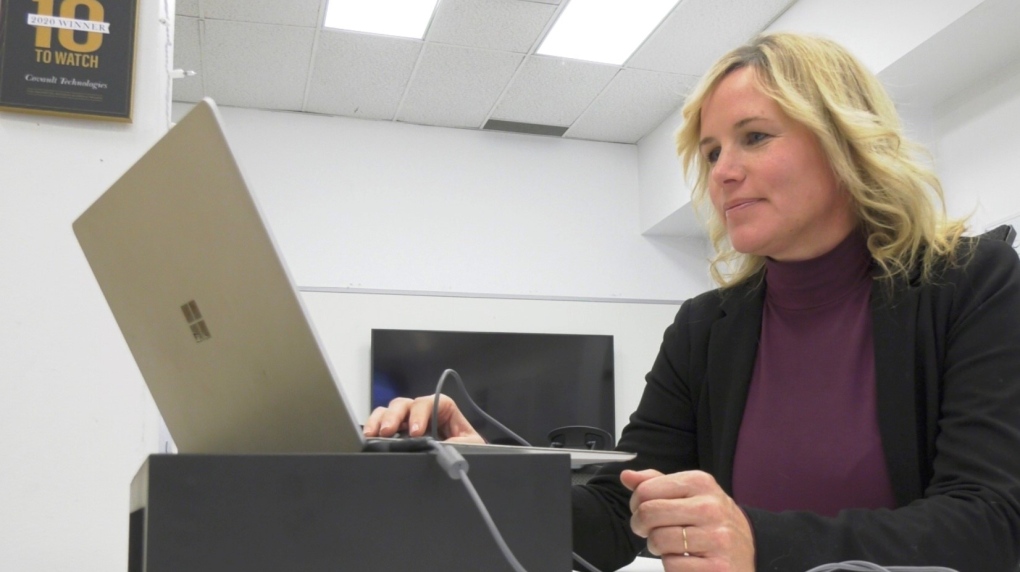 VICTORIA -- British Columbia’s tech industry is a driving force of the economy, but only a small percentage of those involved are women.

On Thursday, some of the province’s up-and-coming women in the tech sector were given the opportunity to pitch business leaders on their inventions and business ideas.

The “Company Pitch & Showcase” is part of W Venture, a partnership program between The University of Victoria, Viatech and Canada’s Digital Technology Supercluster. The women pitching the panel are billed as the next wave of influencers in B.C.’s tech scene by the program’s manger.

A three-month pilot program by W Venture was launched this past September for women in Victoria and the Okanagan who were ready to accelerate their tech-sector businesses.

“We are taking a bit of a different approach with W Venture,” says program manager Shelley Voyer. “It’s very collaborative, very supportive. We really asked for deep critiques of these women so they could improve their businesses.”

“Unlike some pitch competitions, this wasn’t intended to be super competitive; there was no purse at the end. It’s really about feedback and getting better.”

Participants were given the necessary skills to confidently address their unique business challenges and give their women-led companies the greatest chance of success. Personalized, hands-on support from mentors and experts helped guide the entrepreneurs through the program while connecting them with a community of peers from across the province.

Thirty-one start-ups were selected for the program from varied industries, including wellness, clean tech, e-commerce, biotech, and enterprise software.

There was also a diverse selection of founder ages, backgrounds, levels of business experience and company sizes.

“The women’s venture program has been incredible. It’s been a hundred hours of hands-on, direct support, so much learning in marketing, sales and finance and capital-raising as well,” says program participant, Amber Simpson, CEO & co-founder of CoVault Technologies.

“It’s felt like a master’s program to me. It’s been exceptional.”

Simpson started her company in 2018. It offers a digital marketing platform for realtors and brokerages, and it currently employs 8 people and 4 advisors.

Simpson was a bit nervous before doing her pitch Thursday, but says it was an amazing experience.

“The pitch today, I think, went really well,” she says. “We had a couple really good practice sessions before. Our group has gotten so comfortable with each other that it felt really good. We had some great panelists that gave us incredible feedback.”

She says she now has lots to digest.

“I’m really excited to look back in six months from now and start to really understand how all this knowledge has applied to my business,” says Simpson.

The tech-sector CEO is not alone. Many women face the challenges of navigating an industry dominated my men.

Currently, only 10 per cent of company founders in Victoria’s tech sector are women. In the Okanagan, the 39 per cent are women.

According to literature on W Venture’s website, “Women are founding more businesses than ever before, with three times the rate of male entrepreneurs since 1976 (BDC report). However, female entrepreneurs are underrepresented, making up only 28 per cent of the entrepreneurial population and highly underfunded with only 2.2 per cent (Pitchbook) of venture dollars going to female-led companies.”

Women-led businesses are a vital force in the economy and more likely to introduce new innovations into the marketplace and outperform their male-led counterparts.

“It’s really important to increase capacity for women entrepreneurs,” says Voyer, who has first-hand experience in business herself. “We need representation inside those boardrooms and around the table for technology companies.”

Programs like W Venture are committed to expanding opportunities in the ever-changing landscape of industries in which women continue to remain underrepresented.

The W Venture program may be over for this year, but the ripple effect from the women who went through it will pay dividends for years to come.

With such demand for the pilot project, you can expect more of the same in the future if organizers have their way.

“My hope is, come 2021, we can continue forward and even make it better,” says Voyer. “I think it was a really successful program, but there’s always room for improvement.”