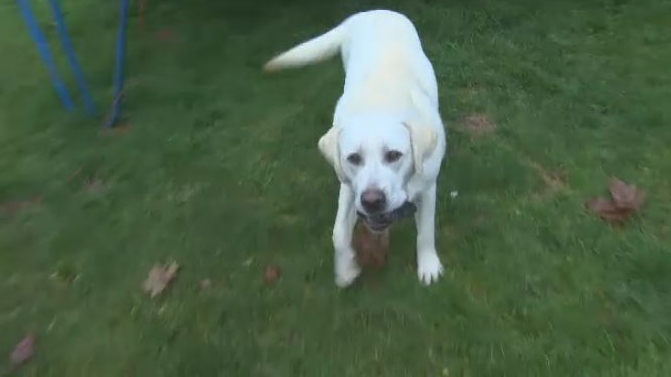 Buddy,a nine-month-old lab, suffered burning in his eyes and spent the rest of the day and night with his eyes closed, his owner said. Nov. 23, 2018. (CTV Vancouver Island)

A Comox woman says her dog is recovering after being bear-sprayed by an angry senior who didn't like that the animal was off-leash.

Liz Lyle-Mattson says she was walking her dog Buddy, a nine-month old Labrador retriever, on a popular hiking trail in a wooded area of Comox when it happened last week.

At one point, Buddy ran ahead of his owner, coming close to an elderly couple who Lyle-Mattson said berated her for having the dog off-leash.

"I suspect he was barking a bit, wagging his tail, not being aggressive, and the woman was yelling at me about the leashing thing," she said. "Her husband announced he had a can of bear spray which he produced, and he basically lunged at my dog and shot my dog right in the face with the bear spray."

Buddy suffered burning in his eyes and spent the rest of the day and night with his eyes closed, Lyle-Mattson said.

"I just felt after the whole incident, I was pretty upset, because I felt it was an unwarranted attack on my dog, who I love," she said. "I think just walking around and policing things like that with a noxious substance is beyond what a normal citizen would do."

She also said she didn't think the pair were seriously concenred for hteir safety.

Lyle-Mattson reported the incident to RCMP who told her that while there is a bylaw requiring dogs be on-leash, they didn't believe the use of bear spray was warranted.

She also said most dogs that come to the particular hiking trail, in the woods near Highland Secondary School, are off-leash.

Other dog owners who spoke with CTV News Friday said they were shocked at the incident, while others also reported exchanging words with possibly the same couple.

"A friend of mine that I walk with in the woods saw the fellow that had the pepper spray or bear spray, whatever it was, in his back pocket," one person said.

Dog owners also said the trails are utilized by far more people with animals than without.

The Town of Comox says it's looking into the possibility of designating a specific off-leash area for dogs and their owners.

Lyle-Mattson said she and Buddy are still using parts of the trail system, but are trying to steer clear of bear spray-toting seniors.

VIDEO: Meeting up with a Courtenay woman who says her puppy was bear sprayed in the face by a senior during an encounter along a trail system in Comox. Story tonight on @CTVNewsVI pic.twitter.com/UM3YZbf8K1