COURTENAY -- A Comox Valley woman has created a "Hero Wall" outside her home to pay tribute to front line workers, like doctors, nurses, truck drivers, grocery clerks and more.

Kris Hopping put up two panels on the fence outside her Cliffe Avenue home knowing she'd gets lots of foot and vehicle traffic passing by.

"I'm glad it's getting a lot of response. I'm also glad that I didn't write 'honk' on it like was suggested by my friend," Hopping says.

The wall enables passersby to add the names of people they consider to be personal heroes during the COVID-19 pandemic. "I've seen random people come by on their bikes and sign it and a bunch of people from the condos come and add some names. I know people come all the way down from Comox to sign it," she says

People have to use their own felt markers because Hopping didn't want to leave one out to be touched by multiple people. The display changes each day to honour different heroes.

"I found some old chalkboard paint and so I made a little chalkboard so everyday I change that to a different group" she says. "I've had grocery store employees, RCMP, truck drivers, cleaning staff for facilities – there's lots of people out there that need loving."

While the display is an honour to others, Hopping says it has also been good for her own well-being. She had already planned to do the tribute but put it up the day after her mother died from non-COVID-19-related issues. 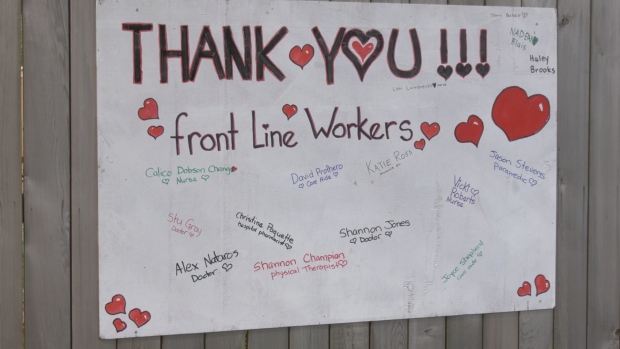 "Doing it was definitely therapeutic," she says. "It gave me something to focus on outside of my head for three or four days."

Hopping has received many comments and thank-you messages through her Facebook account and has also received email requests from people out of town or in quarantine asking that names be added on their behalf.

She has more fence space and panels that can be added should the need continue but Hopping says she'd rather have the pandemic over with.