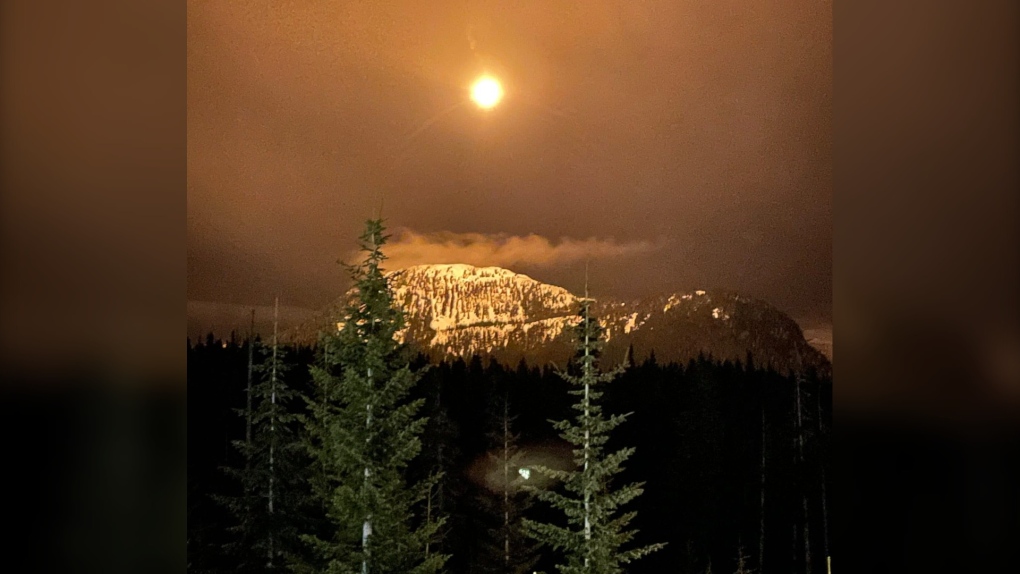 A flare illuminates the sky during a search and rescue operation on Mount Brooks Friday night. (Facebook/Comox Valley Search & Rescue)

Comox Valley Search and Rescue said in a Facebook post that it was tasked with locating and extracting the trio, one of whom had sustained lower-leg injuries.

"Teams on snowmobiles shuttled skiers then snowshoers in close to the subjects, but the terrain was steep and snow conditions icy and hard going," the search and rescue group said in its post.

Once they determined that the injured person couldn't walk out, crews called the 442 Squadron of the Royal Canadian Air Force, which performed a hoist rescue.

Searchers escorted the other two snowshoers off of the mountain, wrapping up the rescue by 3 a.m. Saturday, according to the post.

The rescue concluded just hours before the provincial Ministry of Public Safety issued an appeal to backcountry enthusiasts to ensure they are prepared, saying search crews across the province have broken records for call volumes since last April.

B.C. crews have been tasked 1,959 times since this time last year, well above the average of 1,500 calls they see in a typical year, according to the ministry.

It's unclear whether Friday night's call on Mount Brooks was included in that total, which is sure to grow in the coming weeks.