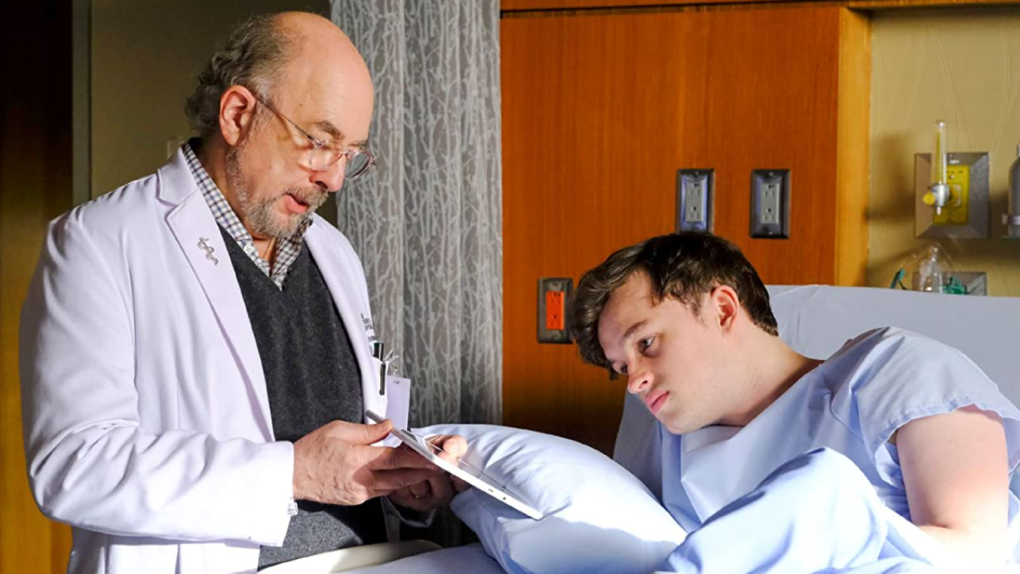 Courtenay actor Michael Taylor (right) in a scene from The Good Doctor.

COURTENAY -- He admits to being nervous but it was a dream come true for a young Comox Valley man who appeared on the television series The Good Doctor this week.

Michael Taylor got much of his early acting experience in the Comox Valley group Courtenay Little Theatre Society but moved to Vancouver to pursue his ambitions and it appears he’s increasingly reaching them. That includes a taping of the episode of the popular medical drama in December.

“It was excitement, it was trying to keep it together, to be professional and do my job but there were lots of nerves going around,” Taylor says.

The young actor played a patient with a rare disease that severely twisted his spine.

Taylor’s character had to decide whether or not to have surgery to repair the problem even though it could possibly lead to the end of his life.

He says he was thrilled to be a guest on the show because he is a huge fan of series star and executive producer Freddie Highmore, as well as seasoned actor Richard Schiff, whom he had several scenes with.

“The only advice he (Schiff) really gave me was that you should get them to book you a massage therapist after this and I was like, ‘You can do that?’ He says, ‘You clearly look very uncomfortable,’ which I was,” Taylor says.

That lack of comfort wasn’t so much because of his nervousness but rather because he had to stay in a twisted position for extended periods of time.

Taylor says the show was originally looking for a contortionist because the character would have to have his body in an awkward position throughout the episode. He was fitted with a large prosthetic for realism.

“I had to hold that position for three or four hours on a table while they (filmed) and I couldn’t move because if I move it messes up the whole cast,” he says. “I put myself in a really bad position where my legs went to sleep and then they woke up again and it hurt like crazy.”

Taylor says he felt fortunate to get the role and has also had appearances on Riverdale, as well as Firefly Lane, both of which are lensed on the Lower Mainland.

“One of the fantastic things about so many of these productions coming up to Vancouver is local Vancouver talent – actors are getting seen a lot more,” he says. “Especially with COVID, since a lot of productions are moving up to Canada, it’s made starting a very hard career to start much, much easier for sure.”

Although this week’s appearance was his most intense in terms of dialogue, Taylor has appeared in commercials like this one. An even bigger thrill came during the production of a commercial for Play Station 4 and the game Star Wars Battlefront II.

“It was the coolest thing ever,” he says. “It was a childhood dream come true working with Star Wars, with Lucasfilm, I just got to hang out and play for two weeks as a rebel leader fighting storm troopers.”

Taylor says viewers would be surprised to learn there was a great deal of live action and explosives used in the production.

“There was no acting necessary, because there was no pretend, it was just, I’m in a battlefield and there’s 20 storm troopers over there and there’s 10 rebels behind me and I’m holding a fully functional blaster rifle,” he says. “It was so fun.”