COMOX -- A Comox farmer who created whimsical artwork out of a tractor and old metal two years ago continues to add to his creation, and continues to be surprised by the responses he's getting from the community.

Chris, who protects his identity as strongly as the shield that adorns the side of one of his tractors, manufactured a silver "knight" out of scrap and mounted it on an old tractor.

He says he received his first response moments after first rolling the display into position. 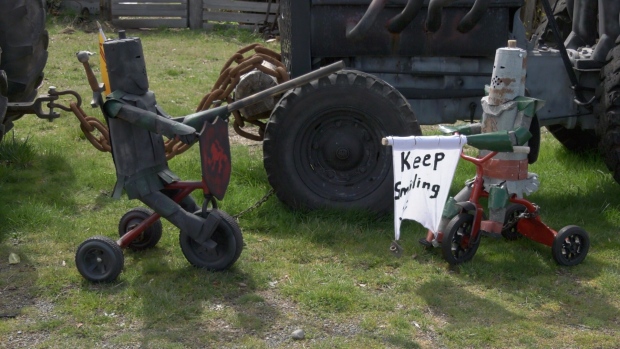 Chris says countless people have been driving by his Comox farm located along – you guessed it – Knight Road to have a look. Many visitors come to take photographs and see how the display changes over time.

"A guy taking a picture the other day said, ‘Oh I loved it when you did the Halloween theme," Chris told CTV News.

Chris changes the display from time to time, adding from scraps he has around the farm.

"Nothing gets thrown away, just piece things together, it's all how you do it," he said.

In these unsettled times, he's noticed more people coming by to take a look. But, the creator still prefers to observe people admiring his work from the background.

"I like doing it, for one, [because] sitting around bored is not what I do,” Chris said.

“I hate seeing things go to waste. So an old tractor here and there - when you have an idea and bring it to fruition and somebody think it was interesting, if not stupid, right on.”

His original tractor included an old oil drum put in place over the motor along with pipes welded on for the “Mad Max effect.”